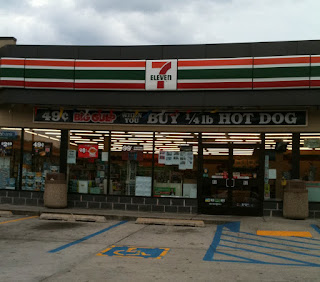 I love 7- Eleven: open 24/7, delicious coffee and a hearkening back to my pig out days of junk food mayhem. I could count on them to supply me with my favorite treats: fire-breathing Doritos, Entenmann's (local bakery on LI that mass produces bakery items and ships them all over) any Ben and Jerry's, hot dogs with chili and cheese add-ons, sandwiches (home made from a Kosher Deli that used to deliver) and yipee, corn muffins. Ah yes, those were the days of reflux, binge eating and sleepless nights where I'd awaken with a start having aspirated food in my lungs, choking and coughing with heavy breathing, thinking I was having a heart attack. The worst was when "I didn't care about my weight" and stopped looking in the mirror, halted weighing myself and refused to look in the direction of anything tantamount to a reflected surface (i.e. store window, friend's stainless steel fridge) or my shadow at 10:00 am or 4:00 pm. Was I that HUGE? Duh!

Now I've returned to my 7- Eleven days, for coffee, cough drops and the ATM machine for quick cash or the occasional house item that I've run out of and realize I need at 1:00 am. Evian water, the Sunday paper. I avoid all the central aisles filled with junk food, processed food and chemical food. I avoid all the "fresh" food in the refrigerated units (a lot of it sitting there for a few days except for the cold drinks) and the hot foods: pizza, hot dogs, fried chicken, etc...all looking very "fine," but very fat and ILL. (For those of you unfamiliar with such slang...that isn't praiseworthy.) For convenience, 7- Eleven is 100% and you pay for that with some pricey items (paper napkins, detergent, pet food). But like a casino in Las Vegas, the "food" and especially the junk food is cheeeeep! 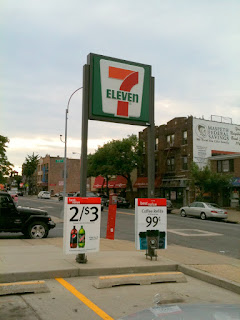 Folks, this is deception at its finest. Welcome to the food corporations of America Mega Millions! Mass produced chemicalized foods, what I call junk food, appears cheap, in comparison to organic food items, fresh local produce and quality food served in restaurants like Craft or Blue Hill Farms.  But if you swallow enough of 7-Eleven garbage food over a period of years without really thinking about it, you will come out with a disease entity: obesity, reflux, diabetes, high blood pressure, etc., that will be costly to treat over the long haul. If I have to spend money, I'd rather spend it on quality food for a high price and not worry about the high blood pressure, or reflux I will have to find treatments for to alleviate my physical stress as my body unsuccessfully attempts to purify itself from the long, slow process of liver, kidney, gall bladder and other organ debilitation created by poisoning elements of tasty treats especially designed by the Agra- business and the food company industrial complex to addict me.

Back to 7-Eleven. In there Friday getting coffee. (Hold onto your shirtsleeves; it's an antioxidant, and I am addicted and have to go on The Master Cleanse to get off it, I know, and will.) I see a young black woman with a beautiful face. She is dressed in slacks and salmon pullover top. I pay for my coffee. She puts a bag of Doritos, a bagel and a bag of Cheetos on the counter to pay for them. A fresh apple or banana would have cost less in the short term and long term. 7- Eleven did have both. Did her food selection matter? Not to me. But it did matter to her. She was over 100 pounds overweight. It mattered. I would never say anything to a stranger and I would interpret any intrusion on my space with regard to my food choices as rude and "none of your business." But I made a mental note as a researcher and writer. In this instance, there was probably a correlation between food choice and obesity. (There was with me.) And unfortunately, there also might be a correlation between obesity and race.

Later, I went to a friend's room; she is being rehabbed. After a longer than usual wait, I got into the elevator with a number of women. Two Caucasian women (me and another woman) were thin. Two Asian women, (a mother daughter team) were thin. Three lovely black women (staffers, two whom I recognized are really nice) all were obese:  not overweight, obese. There is a prevalence of obesity across racial lines.
But that is most likely because non-celebrity black women aren't influenced by iconic beauty images spawned by the Culture of Thin as much as white women are. (click link) It could also be related to issues of economic well being and food choice.

I come from an era where Black is Beautiful. And regardless of whether one is fat or thin, a woman's beauty shines, (even if she is an ugly witch inside). I, too, along with bloggers and commentators decry the Japanese blogger whose post was removed because of what he alleges he discovered. After he posits that black women are on average heavier than other women racially (OK. That is statistically proven in national studies.) he then goes off into insanity making claims using faux genetics about their beauty. If he had just said he was biased toward very thin Asian women, he would have been honest and everyone would have left it alone and ignored him. Bias is bias. Admit it, Mr. K. But to pretend there is validity to your "thesis"?  Ha, ha. The area of Psychology has enough problems of its own. It doesn't need your malarky to infantalize it any further. Freud did a good job of that.

Junk food is healthier than such baloney! But don't eat either, if you can help it. Just use 7- Eleven as a Convenience Store for items you discover you need at 1:00 am in the morning.
Posted by Carole Di Tosti at 3:11 PM

You are funny!!! I'm glad you are getting serious! You know what to do, girl! I'm in agreement with you. Have to do the Master Cleanse; gearing up for it. I wish us both great good health!!!