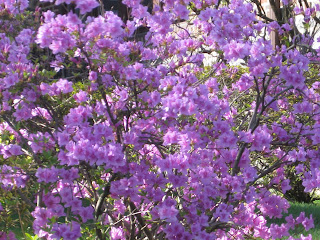 It's spring and traveling time for bloggers. It's a great occasion to smell the flowers and expand your blog follower list, connections and shares. There are marvelous perspectives online that are not represented in the print or broadcast media. And I have become so tired of seeing and listening to the brainwashing, boring copy of cable or network news shows. And I never, never watch TV shows, sitcoms, etc. It is a tremendous waste of time because online readers, journalists, writers have a higher IQ and are much more interesting and insightful. The media tends to dumb everything down because they are aiming to the "middle," or presenting a view that their advertisers support. You can count me out.

So take a bit of time to travel with some interesting individuals and see if there is anything that resonates with you. Click on the squares on the right to begin the views. You will be happy you took the time to quiet your mind, read unique points of view and learn something new.

And if you want to join  us...click here.


The woman in the photograph is so light, balloons hold her up. The picture was taken off a social media site. Underneath the caption reads, "I want to be this thin." On many media sites #thinspo represents the "Thinspiration" movement. Young women post pictures of themselves, often without their faces, just their slender, lovely bodies in a secret and conspiratorial cult of skeletal waifness. They are networking to encourage each other to remain thin. Is this something that should spark our outrage?

Having been obese all my life, yo-yoing 12 times with extreme swings of weight gain and loss, I've resented the global social culture for embracing thin. In my mind I've racked myself with envy of skinny bitches for their beauty and apparent fullness of life. I know how important being thin is. For a woman it is the difference between life and death, between joyfulness and grief. The misery of a fat woman is to sorrowfully wallow in fat denial, while overeating to mute the pain of guilt. Fat becomes a god and supplying its maw and starving the soul becomes a living death. That was what it was for me.

Being overweight and/or obese is a physical hell. It is a never ending emotional self- torture. You wake each and every day overblown with guilt and the resolve to diet. The intent becomes a fait accompli because you never weigh yourself to get a baseline to begin, putting off the diet until a tomorrow that never comes. Guilt increases, self-hate escalates, cowardice and depression augments. The result? You eat more and get fatter.

So I understand how such a "thinspiration" movement IS FASHIONABLE amongst young women and many women who recognize all too horrifically how the culture treats fatties. These young girls, like their mentors in the media, crave to be beautiful on a galactic scale so that it hurts the viewers' eyes. To produce that result, since it is not necessarily the appearance of the face but "the uber thin body that is deemed beautiful," they deny themselves highly caloric foods, i.e. junk foods, fast foods, desserts, dinners, lunches, breakfasts, etc., or hit the toilet bowl with their vomit. They sample a few small bites of steak and four green beans to maintain their size zero skin tight jeans figure. They have no fat rolls, fat back, bulbous, sweat rubbing thighs, ungainly balloon boobs or crinkles of cellulite. And if they take laxatives, and daily exercise their fingers down their throats to be the bony pride and joy of brothers and boyfriends parading them as the status stunner? A BIG SO WHAT!

They have elected LIFE over FAT DEATH. And who are we to judge, condemn, criticize IF we live in this culture that celebrates such an existence? Of course, black is white, red is green, up is down and evil is good. I do not dispute what these young women have been compelled, almost to the extent of slavery to do. I dispute the culture that influences them through overt or surreptitious messages. Either they live the thin lovely or imperil their social existence. The culture places them in a horrific choice between Scylla or Charybdis. Die slowly as you starve yourself physically to appear beautiful: accepted, petted and loved. OR  Live and eat but choke and die socially, because you will be heavier than your peers and most likely be borderline overweight, even obese if you begin the indulgent wheel and woe of guilt, self-torture and muted pain that you have lost your edge in overweight oblivion. Is there a balance?
Can one be just thin and eat? If one wants to look like the beauties in the media that are prized, lauded and celebrated. No. And that is where #thinspo comes in.

Thinspiration women are the most compelled and enslaved in our culture. The trend spans economic classes. Indeed, very wealthy women embrace thinspiration. They have chosen life and success, DUH! have they not?  #Thinspo women create a network of like-minded bonies who prevent them from falling into the statistical pool of America's obese and sedentary. Everywhere we turn, junk food and fast food restaurants corner us with fare that's cheap, plentiful, in your face delicious, highly caloric, and deadly for a woman's happiness quotient. This is the stuff that when ingested, is finger food vomited up. So to combat this war on the thin by the industrial food complex which encourages obesity, thin women post photos of skeletal women on their websites and pinboards with sayings underneath like, "Isn't this worth denying yourself for?"  And "better to starve and be thin than feel full and be a fat pig."
Eating disordered? Well, the overweight think so, of course. But folks, these girls can look in the mirror and leap for joy. They turn men's heads. Their reflections in store windows don't hold an obnoxious surprise. They get boyfriends, lots of them. They cause the swarms of hungry male looks. They can go to a size 2 or size 0 clothing rack and select amazing outfits and everything they try on looks fabulous. They can sport belly rings on flat stomachs and see-through flimsy shirts with bra straps flying out and LOOK COOL. They are to be envied. They are beautiful. They are photogenic. They belong in advertisements on TV and in print. They have an edge. They are IT. Their bodies are supreme and the hot, super great guys want THEM and not YOU. You get the leftover guys who are a hassle to deal with, the pain in the ass, the neurotic, the economically deranged or the one who expects you to be like his mother.

Truly, thinspiration girls are perceptive and realistic. They know how to go far in this culture which lauds uber waifs. They've seen how the fat kids are drubbed to the outer abyss, their egos so flogged they are shell shocked and debilitated for life. They know that fat is death and resignation. They know they must fight for the life equation to remain slender, young, beautiful. And who dares to tell them different is telling them a lie because the culture is reality. And THE REALITY IS HORRIFIC.

Only if we change the culture so that outer appearance doesn't matter, so that being thin is not equated with beautiful, so that being BMI 18.5 is not equated with an abundant life, can we stem the need for "thinspiration" woman. If enough women, with celebrities in the forefront stand up and refuse to be oppressed and enslaved by a soul annihilating culture which fosters the appearance of dealth-like skeletal women and touts them as goddesses of life, will the earth's axis tilt toward health, freedom and emotional balance. If enough celebrities and others decry the industrial food complex that promotes overeating and obesity with a legion of unhealthy, cheap food product, will wellness be restored and the alignment toward health be made. Then maybe, just maybe will  nutritious, non-processed, fresh and locally sourced food, (expensive and made to appear unappealing by the food complex) become more in demand and thus cheaper. And just maybe this elixir of life and wholeness will inspire the overweight and obese to trend healthy weight loss. And just maybe will we be able to expurgate corruption, modify our culture and shift the paradigm so that right is right, black is black, white is white.

http://technorati.com/social-media/article/will-pinterests-ban-on-pins-showing/
Posted by Carole Di Tosti at 10:26 AM 29 comments