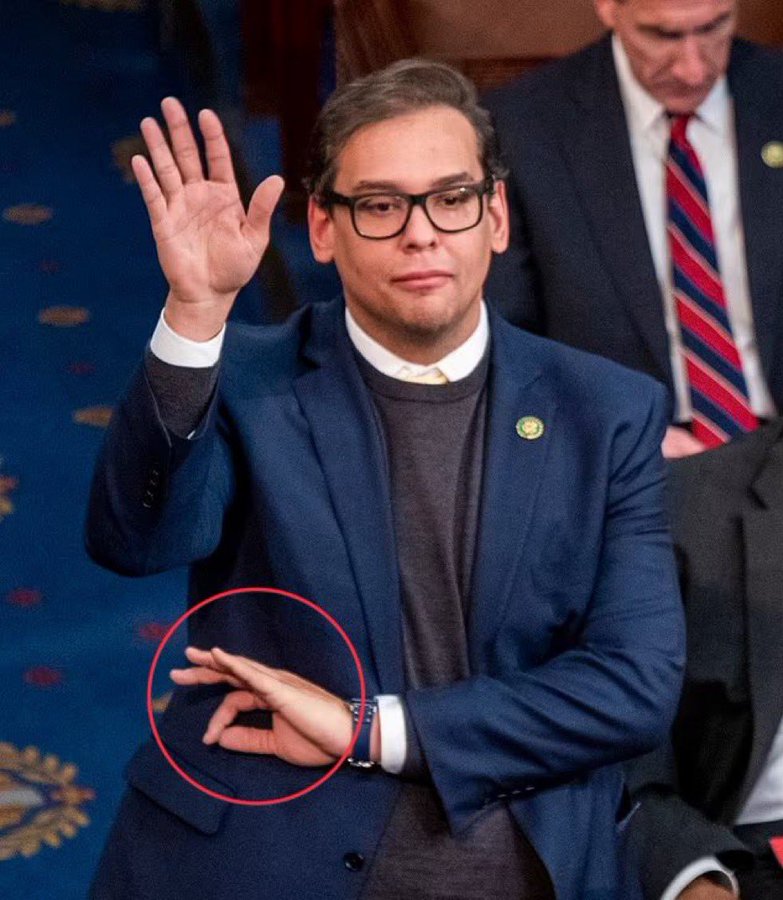 The picture posted on Billy Baldwin's Twitter feed indicates where George Santos' allegiances lie. With one hand he "pretends to swear allegiance to the constitution." With the other he swears his true allegiance to the cult of White Supremacist terrorists who work to create havoc in our congress and elsewhere. That is a "white power" sign he makes with his left hand. If he was a true patriot, he wouldn't need to swear his "white power" allegiance.

As long as we have creatures like this floating in the Capitol, we must call them out and make sure they are not reelected. Since Santos is most probably engaged in financial crimes, his own actions may convict and evict him from congress sooner rather than later.

Santos bamboozled those Jews who believed his comments that he had strong ties to Judaism and the Holocaust. Once again a bounder, liar, malevolent seeks GOP power and assuredly, he is backed by those who count on him to be a anti-patriot patriot. These are the GOP. They are criminals. They do not support the constitution, evidenced by their REFUSAL to call out the January 6th insurrectionists of which many in the House supported. Santos is one of them paid handsomely to be one of them. Thus, like the GOP who lie and pretend to swear and oath to the constitution, they are loyal to the White Power cult. He swears on the constitution as a ruse, like Mo Biggs, Louis Gomer, Lauren Bobert and others who voted not to certify the 2020 election results and who stood in a conspiracy with Donald Trump to overthrow the United States fraudulently claiming Biden was an illegitimate president.

With guidance and help from the shadow White Supremacist GOP that is no more recognizable as the party of Reagan, he will do everything in his and the white supremacist power cult's power to injure, malign, harm those citizens who are Black, Asian, Mexican, South American. Ancestrally an immigrant, with questionable gender and racial issues, his signing proves he is against immigrants and those who are not white. This also pertains to women who the GQP wishes to strip of rights, LGBTQ who they wish to strip of rights and those who do not agree with them. White men, white power cults encompass the KKK, Neo Nazis, Oath Keepers, Three Percenters and others. Just check the hate group map for the ACLU or Southern Poverty Law Center.

Posted by Carole Di Tosti at 7:22 AM 0 comments