Congratulate me! I made it through Christmas Eve, BMI, 19, never wavering! (see previous post). In the weeks before December 24th, like a pig rooting for truffles, I blanketed the turf of my emotionally driven appetite, hunting for any morsel that would capsize my will power and send me to the bread basket to slobber down four croissants in two hours. I snouted every emotional weakness and gobbled down my fears and qualms, staying focused on weight maintenance. Glued to my protocol, I fasted. My stomach shrank. My appetite listed to the edge of numbness. I Tyveked (type of insulation) my mind with the goal of balance. I would not overeat and gain 10-20 pounds over the month long holiday season!

At Christmas Eve dinner, hosted by family and friends, I lay siege to my hungers! I pronounced "Death" on the ranch, and bacon chips and nachos and humus, spinach and red pepper dips and shrimp and hot sauce and Brie and crackers, and salted Planters mixed nuts, all of which were signaling to me from the appetizer table. I turned my nose up and sniffed away the pino and cabernet, preferring to sip lemon water. What I ate (vegetables and some meat, no pasta) I chewed like a bander (lap banders chew 30 times before swallowing). I consumed less than half of the food on my carefully apportioned plate. My salad was crisp with dressing on the side that I never touched, not even a fork's kiss. And as for the baguettes and Italian garlic semolina bread? Ha, ha, ha. It staled and hardened in front of me. My consciousness, pumped by prior fasting, the lemon water drink, shrunken stomach and adamintine resolve, handcuffed my niggling fingers from snatching a crumb crust of bread.

Then followed the interregnum, the clearing of dinner plates and wine glasses for the final salute of the Christmas feast, the dolci course. And oh, the abundance in colorful array. The dessert table glittered with allure, a sparking banner of treats which I adored: coconut custard pie and black forest cake and chocolate dipped, jelly filled butter cookies (Oh, yum!) and pecan pie (double yum). It was war. I put on my shield and helmet.

In my imagination, I reconfigured the luscious sweet smells to week old cabbage in a run-down tenement hallway. I calculated the beauteous vision of this extraordinary bounty of treats as serving plates of larded grease. "Unhealthy, death-filled," was my interior mantra. Maybe another time another place, but not this Christmas Eve.  I breathed slowly and deeply and then I went up to serve and top spinned a bored yawn at the pecan pie, slapped down the chocolate dipped cookies and cracked a whip lash blow to my urgent need to pluck two nuts from their crispy, glazed, caramel pie topping and pop them surreptitiously into my mouth before anyone noticed. I settled into the seat of my soul, breathed again and gulped hot hazelnut coffee, shuttering my pig-out romantic holiday notions of banqueting celebrations.

My host and hostess graciously offered leftovers. I declined. No treats would plague and torment me to gobble them down in the quiet of my home. As I opened the door to my leftoverless car, in the secret place at the center of my being, I chortled, "Bahhh hahaha." I don't remember the drive back to New York City, the truckless wide lanes of the L.I.E., the desolate Grand Central Parkway at 1:30 AM or the cozy entrance to my Tudoresque neighborhood of Kew Gardens. Turning into the driveway, I didn't appreciate the flashing song of twinkling blue, red and green lights thronging the balcony rails of my terraced apartment building, always a welcome sight. My ebullience had ballooned me above the clouds of New York City into satisfaction and victory. I was the conqueror of my former, ritualistic, holiday overeating patterns. I went to bed lunatic with joy.

Christmas Day I arose feeling savvy, clever. I had given myself a blessed present. Peace and joy. Where once I would have been sick with acid reflux...regurgitating pasta sauce, shrimps, potato chips, red peppers, mozzarella, pecan pie, 10 chocolate covered cookies, red velvet cake digestive juices mush, my serene throat and stomach purred. Yeah! I beamed in the mirror at my unbloated face. Cloaked in pompous confidence, I showered then styled my hair with pride and self-possession. I looked beautiful. Today would be a modest supper of artisinal cheeses, fruits, baguettes (which I wouldn't eat) accoutrements and wine (lemon water for me) with friends after a film, a partial celebration since the elaborate Chinese dinner (For Jewish friends, the tradition is always a film and Chinese food on Christmas Day because NYC Chinese restaurants are usually open.) would be on December 26th. The upscale restaurant Emily (born in Hong Kong and a gourmand of fine Chinese cuisine) was taking us to was closed on Christmas.


My weight maintenance was seamless, zinging along with smooth pizazz. It was totally "la de da." Then came the terrorization and robbery. It happened at about the time I was pulling up my GAP size 0 jeans. My radar scrambled. All the warning lights blackened. My defense triggers overheated to melt down. It was a hunger seizure, the worst kind. It wasn't physical...but emotional, psychological. My axis spun outward throwing my balance away from my central space of joy. Jangled and fraught I agonized in a cataclysmic moment of WTF? confusion. I had waltzed through Christmas Eve with appetite impunity. What was this rambling and random pulsation coiling my sanctity of success, squeezing my hopes like a starving python? I turned inward and I saw, THE ABYSS! 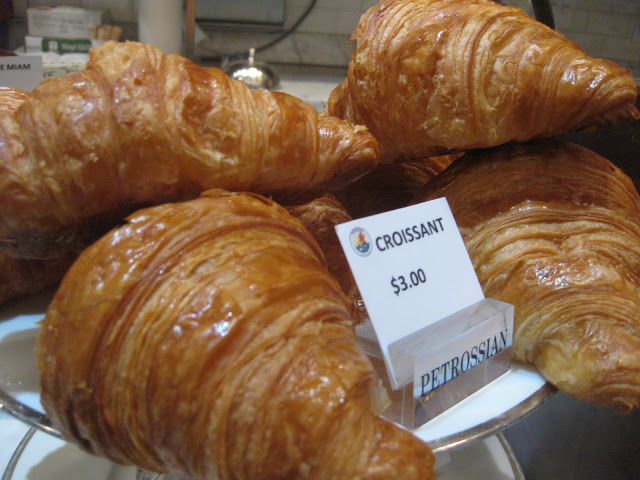 My clarity of consciousness and focus dissipated into fog. Resignation's viral flood swallowed my discipline and temperance. Fear, guilt and trauma massed as a delicate whisper of memory surfaced to override all my good intentions. Tucked away in a closet corner of the fridge and snuggled in delicate bakery paper was a flaky, crisp Petrossian croissant. Nestling near it was a stash of two mouth-watering brioches. I clutched my bright orange turtle-neck GAP sweater, threw it over my head and skipped to the kitchen slapping away the whispering croissant and orange brioches from my mind's eye.

Sighing and breathing deeply, a technique that always helped, I drank some water. Maybe I was dehydrated. But the whispers became ferocious catcalls: brioche, croissant, brioche, croissant. I brewed my cappuccino and sorted the vortex of pangs, emotions, cries, gnawings, knockings. The more I sluiced and head butted them away, the more powerfully they swirled back. The rich coffee aroma peaked the atmosphere. The buttery flakes of croissant pastry kindled my imagination in a bonfire passion. The image of orange brioche delectableness seared my tongue with longing. Food hallucinations! This was a full blown starvation blitzkreig...demonic and psychological. I writhed in the throes of pain-screaming hunger urges.

The coffee finished brewing, time for the steamed, nonfat milk. I sidled over to the fridge, opened the door snatched the milk and hesitated, the pause of eternity. Then I bent down to the last tray of the fridge and rooted for the white bag secreted behind the Stone Barnes egg cartons and imported cherry and blueberry jams from Eataly. It was there. I slammed the fridge door and cursed myself. Why had I not thrown out the pastries the day before on my fast? I didn't want them then. I should have ditched them in the trash. I realized, I didn't need to throw them out. I was fasting, I was prepared, I was strong, I was... sabotaged. The undead, that old familiar rapacious hag of obesity emerged from my unconscious to thwart me again with remembrance of these.
Now, there were two Caroles, the observer and the observed, and I was stumbling and reeling. In the faraway distance I watched myself somersault over the side of my balloon basket dreams and hurtle into the abyss. I crash landed onto the fleshly soil of unconsciousness as the other Carole rose up in bigness. Without compunction and with impunity, she determined, opened the fridge, grasped the bakery bag, tore it open, grasped the tender croissant and bit off its the crusty horn edge. She wished she had purchased three of them. She savored the taste, allowing the dough's buttery flakiness to linger on her tongue, then switched on the toaster oven. Toasted croissants were better than cold ones, though she would have eaten raw dough to fill the void of demonizing pangs. Carole steamed the nonfat milk and added it to the coffee. By the time the cappuccino was made, the croissant was crisp and warm. It was one of the best she had ever eaten.
My unconsciousness lasted for a period of time. I'm not really sure how long. The voracious Carole had her way in a feed of rapturous and malevolent overeating that chained my abstemious self to Lethe* warf. However long, the days dazzled with pastry, muffins, danishes and donuts. I dined with friends devouring delectable Peking Duck (the real Peking Duck) crab, roasted pork loin (three times) from Eataly, luscious rib eye steak at Craft, whipped cream Irish coffees at the Blue Note Jazz Club, more home made pastry treats from Stone Barnes cafe and a savory mushroom and goat cheese quiche from Red Barn Bakery. And much, much more. I would tell you, if I could remember, but I was unconscious. 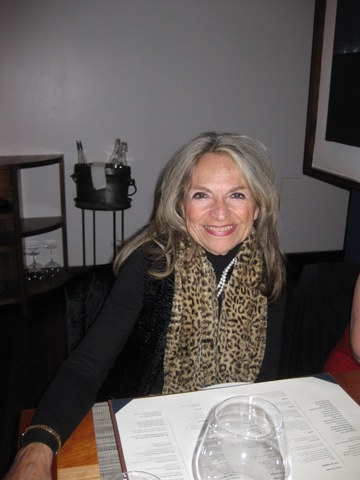 Craft, 12/31. Careful 4 days, then went to the dark side. Just before ordering the wine and rib eye.

Thank God, I woke up. Maybe the shock of the fall when I had been so pompously assured of success brought me back to myself. Maybe it was the mental haze and smoke I've come to realize are symptoms of my overeating malaise. Maybe it was the fact that I had not bothered to try on my size 0 jeans, ever since I had elected to wearing the dressier Ralph Loren 2s, a dead giveaway. Why would the other Carole perform an action that would expose her dark devouring ways to the light? No, she must bask in the swamps of shame, reflux overeating,  pigging-out, swaddled in the comfort of guilt, recrimination, accusation, judgment and ridicule. Those terrors would certainly keep her away from trying on pants that she had eaten herself out of.

Once conscious and aware, I became focused and determined. I summoned my courage to face a truthful old friend. I got on the scale. It was January 9th, a Wednesday, 15 days in the void.

TO BE CONTINUED...Find out how much weight I gained and what I am doing about it.

*Lethe-in Greek mythology this was one of three rivers in Hades, the underworld. One drink from this river and you forgot everything. Lethe was also the name of the Greek spirit of forgetfulness and oblivion.


I'D LOVE TO HEAR FROM YOU. Please share your experiences.

Do you have excellent will power, then cave in to overeating? Share your stories with me on FB or Twitter. Or e-mail me and share how you have tangled with the two halves of yourself. The self who lets you overeat or binge. The other part of you who is abstemious. I will include your anecdotes in a post and keep you anonymous, unless you tell me to share your name.