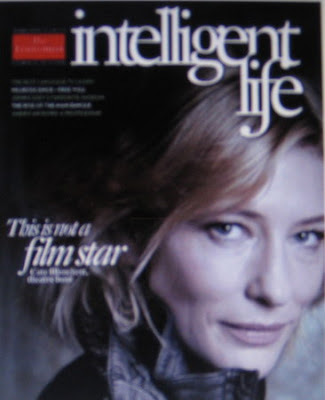 Well, in light of Demi Moore's Photoshop fiasco, Cate Blanchett swooped right in and in a maverick and iconoclastic gesture, highlighted herself on the cover of "Intelligent Life," the Economist's bi-monthly magazine. The meaning and significance is not for the shallow, of course, and that is the point. Her commentary is silent and weighty because she appears without make-up and without, you guessed it, Photoshop! Is this stupid? Brave? An example of Intelligent Life? Probably yes to all of it.

Stupid? Perhaps she will be cutting herself out of future Helena Rubinstein ads when she reaches Demi Moore's current age of 49. No make-up is not what make-up advertisers and initiators of make-up lines (Tom Ford) elicit as good for business. But on the other hand, Cate Blanchette's import and gravitas as an actress is huge. She is beholden to no one, an Aussie who has made her mark off Broadway in Australian theater and in films. She has mounted productions,  A Streetcar Named Desire at BAM's the Harvey Theater in this country and has appeared in Hedda Gabler Off Broadway. She and her husband are artistic directors of the Sydney Theatre Company.

Already on the Hollywood Walk of Fame, she has won numerous awards for her film roles including an Oscar, two Golden Globes, two BAFTAs and two SAGs. Clearly, she may live up to the title of the Meryl Streep of her generation at 43 years old. And she has a stability born of the Australian theatre where she began her career. So is it any wonder that commercialism, Hollywood and the industrial film production are not something she is in tune with? Clearly, does her solid foundation ground her in a reality more profound than anything Photoshop and all its attendant illusions which fuel the fashion industry, the advertising industry, the entertainment industry and other American enterprises in publishing, offer? Clearly, indeed.

So on the one hand, bravo that Cate Blanchett has appeared without make-up to reveal that it is not necessary for one so highly connected and globally lauded to be made into a faux goddess that in reality is a fading fury of stressed out appearance. On the other hand, this is in character for her. She was never one to tout her beauty which for many is not the typical and usual type sold in America. Granted, she does have qualities that universally are attributes of beauty icons. She is blonde and fair and she is tall and slender. To be slender alone, is a key attribute of the beautiful, the coin of the realm!

Additionally, though the photo is not tweaked, skewed and illusioned, there is another element not discussed: lighting. The photographer and his assistants had to light her properly and lighting makes all the difference in the world. As all good photographers do, he or she most likely ran a series. They didn't just snap one photo in the twinkling of the eye and process it. And from that series, proofs were selected and the best ones were most likely picked, to show the intention of the article which was to twit American celebrity. Perhaps the photographer, et. al ran the images by Blanchett and allowed her to select which one or ones to run, a common occurrence as a courtesy to the star. So, this is not the typical family photo shoot by someone without experience or an eye for light and color. And clearly, the equipment and processing were top of the line which can make a difference. So though there was no obvious enhancement by Photoshop, all of the elements of photography most likely applied. Not wearing make-up, appearing naked, is no big deal.

Now, I dare her to appear on TV without make-up. That is a different kettle of fish. On TV more is less!!! (so I have been told by TV make-up artists).

Folks, the Photoshopped image is going to continue. Why? Because this is the United States. Our culture, borne and baked in the sun of LA and Hollywood, the dream capital of the world as its historical name was supposed to suggest, will require much more than a great Australian actress to appear with a naked face on the cover of a magazine to prompt other celebrities, including Meryl Streep, to follow suit. Only until American celebrities of all ages agree to advocate for the reality of the image and eschew Photoshop, only until they repeatedly go naked-faced for all of us to see, only until they stand up for natural beauty, will this futile and destructive race against aging and self-annihilating embrace of the illusory die a final death. I don't think it will be in my lifetime. But surely it will come.
Posted by Carole Di Tosti at 3:39 PM

Thank you Carole for this very honest view. We must teach our children well...blessings - Eleanore

I agree. I do wish someone had explained the impact and influence and media to me when I was a kid.
See you online and thanks so much for your support and kindness.