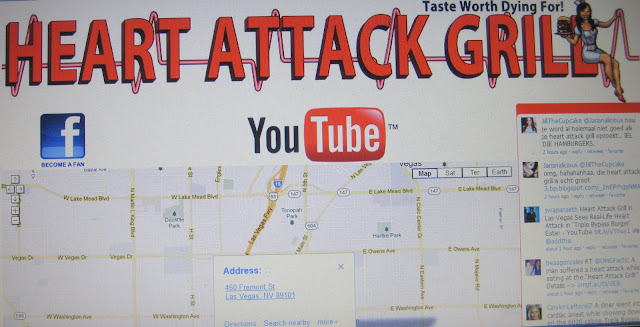 The fatter the better! No, I'm not talking about the fairy tale Hansel and Gretel. At this restaurant, there is no "witch" overfeeding children with the intention of roasting them to cannibalize their sweet, tender flesh, because fat flesh is the juiciest feed of all. No warlock either; well, maybe there is a mordantly humored warlock running this  counter-culture eatery which joyfully praises, encourages and celebrates morbid obesity.  And if you think that it is ravenously wicked to offer the opportunity for obesers to eat their way into a coffin, then perhaps you will also interpret such high concept marketing exploitative and devouring. Maybe the owner is profitably feeding off the flesh of his whale heavy consuming customers.

With that metaphor in hand, The Heart Attack Grill is the adult restaurant version of the Hansel and Gretel gingerbread and candy house: it lures gigantuous portioned hamburger and fries loving Arizonans (Chandler, Arizona; scheduled to reopen after renovations) and Texans (Dallas, Texas) to its calorie den for the daily festivities, enacting a  "mirror, mirror on the wall who's the fattest one of all scenario." A scale (obesity fitted) is placed in the center of the room for weigh-ins. Patrons get to devour voyeuristically  as the fattest, most morbid obeser is weighed to the cheers of encouraging customers. Did this fat justifier make weight? If the needle registers over 350 pounds, the whaler wins the prize; Russian Roulette with any sized hamburger and fries bullet. Ladies and gentlemen, this is feederism at its most prurient, macabre and revolting. And that is the intention of its owner; to serve nutritionally pornographic food that is "so bad for you, it's shocking." But if you're obese, it's a gas because the grill makes FAT, PHAT!! 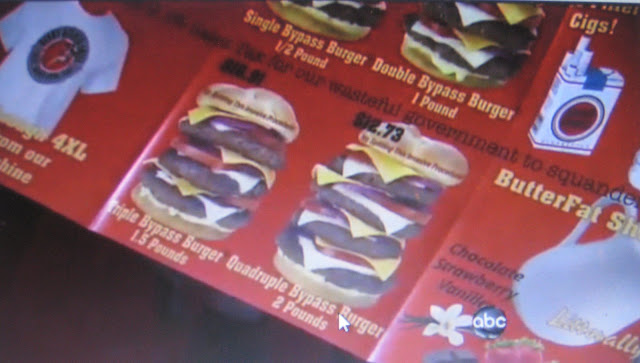 When was FAT ever cool, the max or awesome in our culture except as a LOL John Stewart laugh riot? FAT IS NOT IN, was NEVER IN, except three hundred years ago, when everyone was starving and famined out and only the rich could afford being gluttonous. It wasn't even "IN" during Roman times (check out their buff statuary). Instead of swallowing their ten course meals and gaining weight, the wealthy practiced their B.C. and A.D. versions of bulimia:  they regurgitated in their vomitoriums so they could leisurely elongate their gustatory pleasures. They sated themselves to disgusting fullness, vomited, then went back for more. No intent to digest and be fat; just to eat with impunity.

And I thought the Romans were real orcas? Well, the folks who've created The Heart Attack Grill actively advertise that their food is "worth dying for." They identify their grill with a medical intervention theme; Dr. Jon in a white lab coat flips burgers and checks the customers (patients in hospital gowns) with his stethoscope. The bazzomo nurses, after taking the orders (prescriptions) and hospital tagging them to the "patients'" wrists, serve the burgers and fries that are named for their high caloric treatment, i.e. Single, Double, Triple and Quadruple By-Pass Burgers. (8 to 32 ounces of beef, with layered accompaniments of lettuce, tomatoes, cheese and sauce on a lard coated bun)  Daily chomping on a Quadruple By-Pass Burger at 8,000 calories a gag, will surely give you the heart attack the marketers promise if you chase them down with all you can eat lard fried flatliner fries, cokes (never sugar-free) or beer and a butterfat shake for sweetness to cut all that salt. It's a menu fit for Phatness. 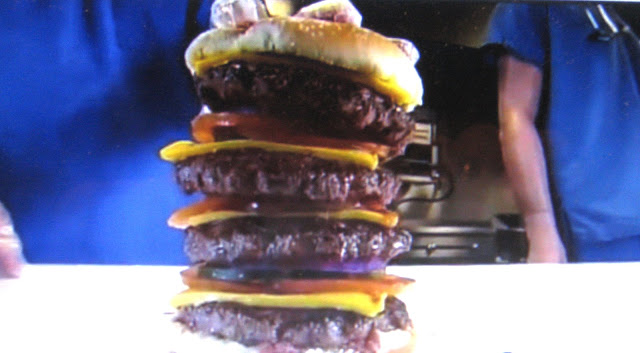 Somewhere in my twisted thoughts, this attempt to embrace the Fat Acceptance movement with great good will and good spirited fun, encouraging the fattest to become even fatter sounds an alarm to me. On the one hand, this seems a tremendous boon to the obese because our culture does nothing to recommend itself to the overweight, and in fact, turns them into repulsive sub-human Morlocks who should live apart from the rest of us sanctified thin people. The food companies blitzkrieg American grocery shelves with high caloric, high fructose corn syruped, chemicalized, processed snacks and "food" items, and the weight loss and medical industry on the other side spew like volcanoes about medical conditions related to obesity. Where can a fat person get a break from these strum and drum contradictions? An "in your face" restaurant that caters to both and provides a freak show; see the "Fat Lady" entertainment! Now folks, this is a clever way to harness our rage against being demeaned and hellfire preached at by sanctimonious, skinny scarecrow broadcast journalists, self-righteous doctors and researchers, and the celebrated elites who wouldn't be SEEN within a one mile radius of such an unfit place.  Very clever. But not very smart. I do hope God doesn't have a sense of humor.

This IS a place for the F--- You "Z generation," but not for the diseased elderly, unless they are opting for their own take on Dr. Kavorkian's solution to end all ills. One visit to this grill and you're heading toward heaven. The ironies lightly whirl like fairy dust, except for one which is truly dark and lands with a thud. The marketing face of the H.A.G. (See what I mean?) was a cute, sweet, twenty-nine year old, who was a whale of a guy at 575 pounds. Advertising the burgers and fries, he happily ate for free, as much as he liked. Now, he can no longer represent the grill in its videos. He's dead. THUD.

But he died of pneumonia, not a heart attack, you say? You know what? I have an uncanny suspicion that beneath all that flesh was a "thin man crying to be freed from his fat." The young often wear the clown's face to entertain; it's a masquerade hiding the tears deep inside. His autopsy may read "died of complications from pneumonia," but I think he died of a broken heart. Self-ridicule can kill you and so can The Heart Attack Grill, especially when all liability issues ARE OFF!!! (read the fine print on the menu)
Posted by Carole Di Tosti at 5:34 AM