Last week during the Anthony Weiner boondoggle and bruhaha, sturm und drang, I drove by One Ascan where Weiner keeps an apartment in the 1920s planned community of Forest Hills Gardens. Two years ago I looked at apartments in that building; I'd love to live there; I hear that his is up for sale. Hmmmm!!! Anyway, Weiner's Wondering Wanderers were out in force, hoping to catch sight of him on his way down to the abyss of outer darkness, praying they would be the ones to capture on camera his downcast eyes and quavering fatal words, "I am going to resign." I spoke to one camera man who said he didn't think Weiner would show there at all, but it was worth the outside chance. 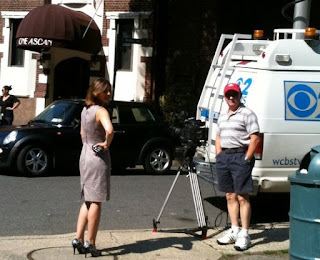 After I parked my car, making sure the time receipt showed starkly on my black dashboard (They boot and tow you in the twinkling of an eye in this spectacular tudoresque private enclave of Queens.) I sauntered over to take a picture of Weiner's Wanderers and a front woman for one of the major networks. I considered interviewing the interviewer, but stopped myself, preferring to take a surreptitious shot as she texted on her blackberry. Rarely are journalists themselves interviewed or photographed candidly. Here was an opportunity that I intended to blog about. She was very slender, with a thinner than normal BMI, clearly in the Underweight range. I thought, "This is so typical. Where are the fatty broadcast journalists?"

BAM. Like a vulture seeking a carcass, a mike was shoved under my nose and a camera woman pointed a hand held square into my surprised face. Luckily, I had put on lipstick, but other than that, I was only armed with my intellect. "Should Weiner resign?" (This was the day before he resigned.)

I smiled and said, "I will answer your question if you answer mine."  I saw her pause in enthusiastic acquiescence. I knew what she expected: resounding litany, "Of course. He's perverse. He lied. He covered the truth like a weasel. He betrayed his office."

I couldn't resist. I said with a slow, pointed irony, "What size do you have to be as a broadcast journalist? A size 0? A GAP size 23 jeans? What is your size?" 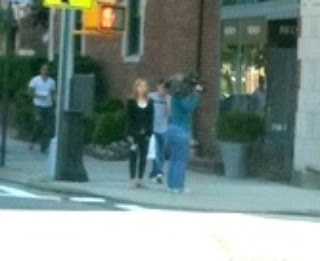 She was in shock, confused, unable to say anything. The camera woman who was overweight was smiling. I continued, introducing myself as a blogger interested in cultural issues related to weight loss and health. She was still with me. I finished stating, "I don't think any obese women would ever be allowed to be on camera, nor would she ever be considered for a job as a broadcast journalist." The look on her face was so out there, I knew she thought even the mention of obesity and broadcast journalism in the same breath was abjectly absurd. To climb on that ladder up the canyon of shattered dreams, she had had to struggle to keep herself fit, thin and camera ready even when she went to bed at night. A whale in front of the camera! Was I insane?????

Then I said I was ready for her question which she rattled off so quickly, I barely heard it. Of course, after cutting and pasting with the first time she questioned me, my comments would be edited and re-sectioned like my cousin's colon after her recent surgery. My answer about Weiner was patently arcane and obscure and very long. I ended with, "I need to have more information." We parted and I complimented her on her thin figure and she smiled, happy at the reaffirmation of all her hard work staying fit and lovely before the cameras. Why did I feel rather sad at this?

If I can ever get these pictures off my Iphone, you'll see the players. But you won't see me on camera, at least not in the jeans and yellow top I was wearing that day. My comments were a rant, too long, off the topic of Weinering and not what was called for:  HIS RESIGNATION!!!
Posted by Carole Di Tosti at 10:43 AM

Email ThisBlogThis!Share to TwitterShare to FacebookShare to Pinterest
Labels: Controversies