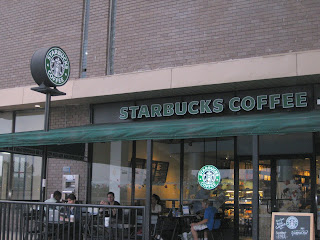 I'm currently sitting at Starbucks, one of my favorite places because of the atmosphere, the cappuccinos and lattes and Howard Schultz's attempt to bring a bit of my ethnic (first generation Italian) homeland to the US so that we Americans, as the Italians do, can savor and enjoy the simplicities of life (an espresso and panini) before running the next leg of the rat race. Unlike the Italians who enjoy a cappuccino only in the morning and espressos at a bar during the day and after a fabulous evening meal, I enjoy a latte or cappuccino at any time of day. I'm just a transplant, after all, with an unsophisticated palette unlike my Roman, Milanese and Perugian cousins.

But after visiting Caffe La Vazza at Eataly and ordering an organic, nonfat cappuccino which was spectacular (such delicious caffe) I was pitched out of Starbucks heaven to crash deep into the bowels of annoyance. How come Starbucks coffee was just OK? And how come Starbucks never offers organic milk, only organic soy milk?  I have digestive issues with soy. Where's the choice?

Eataly, a NYC restaurant and food shoppers' paradise which carries local, organic, home made and fresh produce and foods (also products imported from Italy) boasts getting their milk from a local farm in Battenkill, New York and their soy milk from Vermont. They only use organic milk and soy milk from these farms. Why can't Starbucks do that? Pricing you say? Starbucks could offer organic milk and price it accordingly. I certainly would pay the difference in price. For me it is worth paying the difference.

Do you know why? Health reasons. I'd rather be drinking milk from cows that have not been grain-fed fattened, pesticided and chemicalized with artificial hormones and antibiotics because their living environment is disastrous to their physical and emotional health. I would rather be metabolizing milk nutrients from a happy cow than from a cow that is cramped, miserable, feeling sick and not experiencing a sense of well being or quality of existence in its time on this planet. 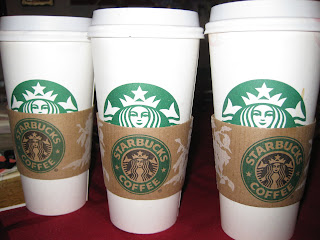 I've been to a family dairy farm. It was thirty-six years ago, before the factory farms that agra business cloned in the 80s laid it to waste. It wasn't an organic farm, but the family that ran it loved those cows and knew each one by NAME and the cows knew when they were being chided and called by NAME! And the dogs that herded them, I particularly remember Duchess, a feisty Dalmatian. She prided herself on her expertise at rounding up the obstinate, ornery cows who preferred to assert their autonomy in not dutifully returning to the barn for milking, despite their dessert (oats) reward. Those independent cows really enjoyed the freedom of the pasture. And don't we all! Wall Street hedge fund CEOs and investment bankers flinch and squirm at the latest SEC regulations. They race to hire pricey legal teams to flout laws whenever they can. Now, you can really empathize with how caged cows and pigs feel! And they have no legal teams to spring them from their barred filth and miserable lives.

OK, if I'm exaggerating, then hang around a barn with some cows for half a day. A patient observer can see that they have emotions and intelligence. Sorry, to all the scientists out there who are proponents of the "dumb beast" philosophy that has been used in the service of agra business. It's convenient to think that way. The poachers who mutilate animals for body parts and are rendering species extinction along with habitat destroyers also think conveniently. Thinking conveniently is a luxury we can ill afford to pay. 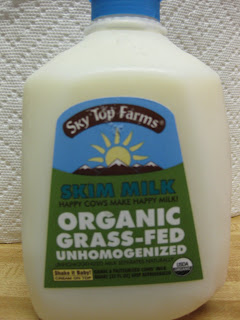 I just ordered another venti, nonfat, wet cappuccino. I'm such a hypocrite. But changing bad habits takes gumption, determination and readiness. For now, I just hope my liver and kidneys are able to deal with the crap that's in the milk. And maybe after I do a Master Cleanse, I'll be able to free myself of drinking non organic milk.

Heck yes, I also wish Starbucks offered organic milk. They did for a short time back in 2008...but discontinued it.

And even though Silk Soymilk is supposed to be GMO free, it's one of the sketchy borderline "maybe there's a little, maybe there isnt" b/c of gmo crop contamination. And silk they have carageenen (spelling?) in it as well--which is awful for you.

Their pastries are full of GMOs though.

Starbucks is junk food in disguise.