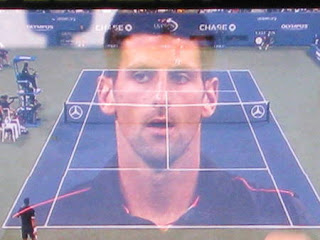 I am a huge tennis fan, having dropped a chunk of money at the US Open for the last 9 years for seats, memorabilia, the whole shebang. I've had the mini plans and exhausted myself going day and evening, especially to see the early matches, mostly the exciting ones held on the grounds. The swarms of internationals, the dense crowds, the heat, the sun, the mammoth lines to Louis Armstrong Stadium, the wait times (and you might not get in)...so what? It is the most amazing global venue for tennis, and it's five minutes away. I refuse to move from Kew Gardens because I'm centrally located near the Billie Jean King National Tennis Center where I also play indoors in the winter months, and the airports (5 minutes to LaGuardia, 15 to Kennedy).

I have seen Nadal, Federer and Djokovic when they were coming up. I was court side when I saw the Magician (Fabrice Santoro) with great good humor and elfin grace rankle Federer until the Fed won in three entertaining sets. I remember watching courtside this guy Nadal in pirate pants beat Carlos Moya (adorable)  wishing and hoping Moya could overthrow him in the last, not even knowing whom I was looking at. And I've seen Djokovic collapse in the heat and call time outs because of asthma and later being teased about it by his tennis colleagues for all the medicals he pulled.

I, too, have had asthma and have been tired and exhausted. If you don't have it, you just don't register what it's like to be out of breath during an asthma attack, or weak chested even without allergens present...and tired, though somehow you manage to push yourself, though you feel like resting. Fatigue? Asthmatics have more than their share of it, and others, not knowing the full effects of the disease, think they are lazy, weak or prankster lying to "get out of work!" NOOOOOTTTTT!! 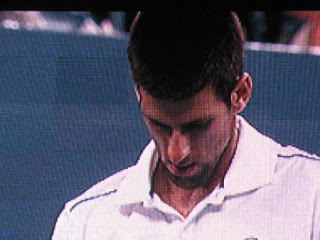 I discovered that my fatigue, my aches, my asthma, my eczema and especially my overeating was caused by a gluten allergy, not typical of what doctors have assumed to be symptoms of a gluten allergy which is diarrhea. I have been off gluten now for over two years; the progress in my weight loss and the current health I enjoy I never would have known was possible. So when a friend told me she heard a commentator discussing with Dick Enberg (who said it was probably just an emotional thing) how Novak trounced his love of pizza, pasta and other gluten items to strengthen his immune system and create a healthy body, I felt vindicated! Would you believe I have had friends think I am nuts about this gluten thing; I was asymptomatic regarding the typical, medical industrial complex diagnoses for gluten allergy. But I just knew how I felt! (click link) 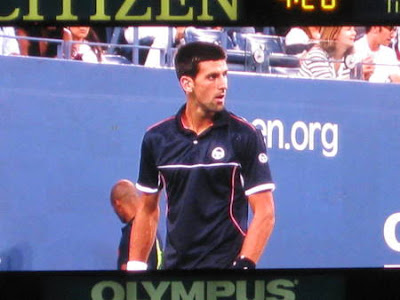 Likewise, Novak knew how he felt before and after overcoming his gluten allergy. (Athletes usually bulk up on carbs for strength they need; little did he realize what he was bulking up on was making him sick and destroying his health.) He looks marvelous and he has been playing incredibly well. I do not find any of this coincidental or "mental/emotional" as Enberg suggested. (Would someone please tell that man to become knowledgeable and if he chooses not to, just hold his tongue!) And now, Novak has won Wimbledon. I wish I could say I'm surprised. I'm not. His excellent fitness (mental and physical) stress free of the toxins that were debilitating him for his whole life (yes, gluten is a toxin for those who are allergic to it) will guarantee more Grand Slam wins for him. Congratulations, Novak! We raise a cup of gluten-freedom to your continued success!

Diana commented that Nadal looked unsettled around his stomach during the match, while Novak looked balanced. She said,"We are what we eat."