I Turned Over and Signed Up for the CIA 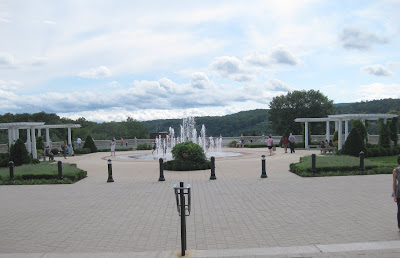 I caved in! No more thought of the Master Cleanse, until next week. Maybe then I'll be ready to commit myself, something I can't do regarding relationships with men either. Oh well, I'll be in more determined frame of mind because I will have gone to two wonderful restaurants to initiate my goodbye to food and hello to cleansing. But until then, YUMM! I'm eating the best food at two lovely restaurants designed for someone like me who loves to eat healthy, local or organic dishes prepared/designed sumptuously and creatively by expert celebrity chefs or celebrity chefs in the making. And that's where I was yesterday for lunch. Tasting the fare made by future celebrity chefs and being served by celebrity graduates of the CIA in Poughkeepsie, New York. That's Culinary Institute of America for those of you hungry to learn more about the political-military-security arm of our nation.Sorry. This is not a conspiracy weblog, at least not this post.

My gourmet friends and I chose The American Bounty Restaurant in Anton Plaza's Main Building with lunch executive chef and instructor Robert Mullooly presiding. We had a fabulous time eating, drinking and being merry and afterward schmoozing with the servers who were absolutely walking on air because they were graduating in three days and were going on to fine jobs in NYC restaurants. I can understand why they are ecstatic after two grueling, compelling and competitive years of chef instructors flunking out their colleagues for not chopping, shredding and cutting within the proper guidelines for a dish, to cite an example of just one small element of what was expected of them in addition to receiving high grades in Culinary Math, Meat and Seafood Identification and Fabrication, Controlling Costs and Purchasing Food and Formal Restaurant Cooking. But the ones who served us yesterday were heartened by friendships they made in their cohort survival groups where they learned, "It's just part of the business. You can't take the competition and the instructor chef's remarks personally!" Sink or swim! The read at the CIA is like Scott Turow's One L about his first year at Harvard Law School. Life under a pressure cooker, though one would think one doesn't have to be as "analytical and IQ-ed" as a potential Harvard lawyer in a mere cooking school. But pressure is pressure, stress is stress no matter how you categorize it. And perhaps it is more noble to feed others than to feed on others as some in the latter profession are wont to do (Barry Sheck and the Innocence Project and others like him excepted.) Sorry, but there it is!

We made delicious selections from the lunch menu at American Bounty. Rita and Emily had the soup sampler which both enjoyed. Emily, a gourmet chef herself who prides herself on her sophisticated and discriminating palette, thought that the lobster bisque was lighter than most heavily creamed bisques and she commented that unlike unmemorable bisques, there were sweet pieces of lobster. The cauliflower soup was the least liked by both, without taste and not well seasoned, but the mushroom soup was also excellent.

For entrees Elizabeth had the Pan Roasted Duck Breast with Wild Mushrooms, Vegetable Farro and Smoked Tomato Chutney which she enjoyed and said was tastier than other duck entrees she has had elsewhere, i.e. Long Island restaurants. 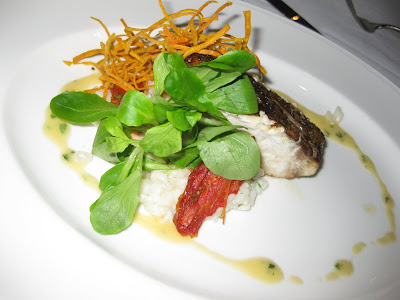 Emily thought the vegetable (arugula and crispy carrot) accompaniments and risotto were beautifully prepared, seasoned, the risotto done correctly with the appropriate smoothness and consistency. However, the fish, although savory, was a tad dry, most likely left one or two minutes longer to cook than should have been. The item was not on the menu probably because they had run out of Pan Fried Soft Shell Crabs.

Silvana enjoys poultry and has become a gourmet of sorts of chicken and turkey dishes which she will order in diners (sandwiches...safe bet) as well as better restaurants. Emily and I smile when we go to upscale restaurants and we anticipate that Andrea most likely will be ordering the poultry dish, although she does order fish and occasionally a meat dish for protein,
but this is much less frequent. 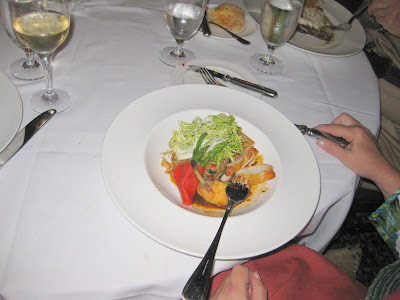 On this day, Silvana followed her love and ordered the Pan Roasted Chicken, Piquillo Peppers, Chorizo Brown Rice, Spinach and Lemon Thyme Jus. Says she doesn't get into food as Emily and I do and doesn't have "a religious" experience over it as Emily or I might. However, her palette is sophisticated; she eats at fine restaurants as well as family style and more moderate. She goes with the flow. However, I can tell when I ask her and she says a dish is "OK," and that is that! She said that this Pan Roasted Chicken dish was, "Very Good!" Now, with all her chicken dish experience, I know she meant what she said. The chefs had gotten it right!
Coming off my moderate attempt at trying for the Master Cleanse, I kept it simple and ordered two salads, the exotic Roasted Beet and Goat Cheese Salad and the Spinach Frisee which I thought were wonderful. The beet salad included oranges, pistachios, various beets, some sweeter than others, rather pungent and earthy pea shoots and balsamic vinaigrette. I preferred the Spinach Frisee because of the variety of ingredients which after the fresh, local spinach included candied walnuts (yum, yum) blue cheese, chopped egg, bacon and lemon hazelnut vinaigrette. Loved it most, though I enjoyed the beauty and creativity of the beet dish. I mean really, how interestingly can you prepare beets? They did an imaginative job and I loved the integration of the pistachios, a favorite nut.

The meal ended with French press coffee, tea and Elizabeth had room for a devilish piece of White Chocolate cheese cake with berries and sauce, though the rest of us were stuffed. After saying our goodbyes to the graduates (two days left) we took a few more pictures of the Hudson and picturesque, breath-squeezing views and vowed to return to hit up another of the restaurants, maybe in the fall with the turn of the leaves. The Hudson River Valley is spectacular with lacy yellow and red leaves against the cerulean sky of the cool fall days.
Posted by Carole Di Tosti at 12:36 PM