Since sitting in Louis Armstrong Stadium at the Billie Jean King National Tennis Center on Friday, I have spent the last two days obsessing about this bloody woman, Irene, whose violent effects have killed 21 persons, thus far, two in New York.  I never watch TV. I watched TV to keep abreast of the latest news on the storm.  I always go to my office in Starbucks. Starbucks has been shut down for two days for the safety of its employees. Sigh! I miss my venti, nonfat cappuccinos.

Mayor Bloomberg and Governor Cuomo decided that all MTA services including the LI Railroad and Metro-North should be suspended because of the possibility of power outages, passengers stranded, flooding, trees on the rails, and other sundry increased risks of harm and liability to employees from Connecticut, New Jersey and other states (Pennsylvania-my friend) who work in NYC, not to mention anyone planning to come into NYC for fun and frolic in the storm. The word was out! Stay away and stay home. We don't want your death on our heads!!!

As of this post, only bus service has been spottily restored in Queens, Manhattan, the Bronx and Brooklyn and you get to ride for free today. As assessments are made about the damage, subway service will gradually be restored. New York 1 news has the latest update. And Amtrak is having its difficulties all up and down the East Coast from Philadelphia to Boston. And of course, New York airports have cancelled flights and will open sometime tomorrow. My cousin Louis who flew in Wednesday from Tacoma to visit with family will hopefully fly back tomorrow at some point when they reopen the airports. He was scheduled to fly out today. The Long Island Railroad and Metro-North have suffered the most damage from sweet Irene.

In retrospect, though some are thinking that the Mayor's and Governor's decision was based on political expediency and the response with the help of the press was overblown, I think it was the right one to make. I followed instructions, taking all my plants and planters off my balcony: I live on the 6th floor. My car was garaged and safely in its bed; I had enough water (I'm still trying to do The Master Cleanse and failing.) and lemons and organic maple syrup B and cayenne. And after a lousy tennis game Saturday morning in the torpid humidity and mosquito feast and drizzle, during which I worried about clearing off my balcony, I went home, took two hours to drag in all my plants and then hunkered down and watched the news and went online when the news bored me because I hate TV.

During that time, Irene ranged  up the coast creating her havoc, stretching her arms out to claw through Queens. This is a bit of the stench of damage she left during the night.  These photos were taken one mile from my apartment building in a section of Forest Hills that is heavily tree lined with huge and lovely oaks. The ground had been saturated with water and the roots were loosened enough so that a gust of wind from the right direction could tease the tree from its years of comfort and snap it out breaking its life in a swoop of terror.

Whether the unfortunate car owner was away on business or just happened to forget there was a hurricane coming and naively parked next to a tree that had stood for over 50 years, never imagining both would be subject to painful cataclysm...will never be known. Fortunately, no one was in the car at the time. 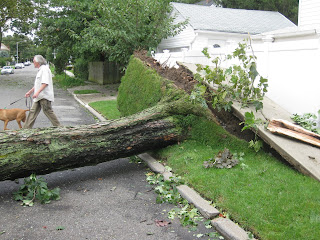 The previous evening, in consideration of the hurricane, an SUV owner recognized the danger and circumspectly parked on Manse, not on 72nd; he avoided disaster. A neighborhood resident walking by with his dog told me he had spoken to the owner, of the house to the right in the photo, who heard the ferocious wind gust around 3:00 AM and saw the tree attempting to resist; then it toppled into the street, pulling up the sidewalk as it surrendered to its fate. The dog walker reminisced about how the neighborhood had changed since the tornadoes of last September and the additional 10 trees that had been brought down by Irene. Going down the streets the trees arched like a canopy. "Now it's like a beach, so open." And he referred to the tree. "It was a favorite. Beautiful colors in the fall."

Then in my immediate neighborhood of Kew Gardens on Parklane South which borders and curves around the largest park in Queens, Forest Park, following the road and in the middle of the park which is home to 100 + years old, fabulous trees (filling the area with the freshest, purest air in Queens) on both sides Irene left her imprint to frustrate the NYC parks department. I happened upon two employees of the department. One was an official making assessments to pass on to clean up crews in Queens. The other was a part of the clean up team. Both were past their point of patience and tolerance with the situation.
When a gentleman (whether a concerned, helpful neighbor or the car owner was unclear to me) asked if he should cut down some branches on top of the car with a chain saw, the official barked, "Don't touch the tree. Don't touch anything. We will get to it." The official said they had 1300 crews out taking care of the situation. And he also said the hospitals were full of people who were injured already and didn't need more. Of course, the implication was in trying to help cut up trees, a Queens chain saw massacre could easily occur. The official's point was a good one and a reminder that injuries not only occurred during a storm, but well after it in the clean-up process. And one must take heed not to add to them attempting to be a help, unless supervised or unless he/she knew unequivocally what to do. Some would say, "Just do it! If you ask, you know the answer will be, NO!"
But when a tree falls on one's property, and is not obstructing a road, then it will take longer for the city to get to it. Last September when this occurred in Forest Hills Gardens, the private association for the gardens immediately took care of the trees. Outside of the private garden district, the city took a while to get to the streets where trees blocked public roads. What is interesting to note here is that there is no yellow tape around the tree. At this point Sunday afternoon, no one notified the city about the downed tree. You can envision the scenario; by the time they wait for the city to come (since it is not obstructing a road) they could hire a private service to take care of it or do it themselves. What would you do?


After I took these pictures, I met a friend who had cabin fever like I did and we shopped at one of the few food stores that was open and stopped for a cappuccino at Nick's Pizza on Ascan Avenue, yes the same Ascan I posted about, the same Ascan where Weiner used to live. (unless he didn't sell, yet)

We both had parked in front of SS Natural, but across the street were two huge trees on the lawn of the Mary Queen of Martyrs, one larger than the other. The wind had kicked up and was gusting quite heavily. The trees were swaying and snapping their branches in the wind. Suddenly, though I am a person of faith and couldn't imagine those trees coming down on our cars, I thought I did have to drive under the branches of other 100 year old trees in the neighborhood not so spiritually situated. And besides, I had to make sure the plants I had put on my balcony were still there and not flying into my neighbors' windows. I got in my car out of the 43 mph wind gusts and light drizzle when a fire truck with sirens blaring raced down Ascan. My friend was doing a U-turn to go in the opposite direction where she lived and I proceeded to the light and turned down Ascan, thinking to turn left on Union Turnpike where there might be fewer trees. There was the fire truck. The firemen were putting the yellow tape around a tree that had just fallen from the embankment by the railroad track onto Burns Street, right across from One Ascan Avenue. The tree had fallen probably as my friend Emily and I were chatting about those trees swaying presciently in the gusting wind in front of Mary Queen of Martyrs. I turned around, took this shot, then went up Queens Boulevard. It's open like a beach. But there's no water.
I got home safely and brought some plants in to stop their shaking in the wind. As I write this, the gusts have stopped. Tomorrow I will be at the Tennis US Open and the sun will be shining. The clean up will continue with few injuries, hopefully. Thank God things will return to their routine nature w/o a certain female to harass us. But we will feel her aftermath for a long time, and some forever. RIP.

Email ThisBlogThis!Share to TwitterShare to FacebookShare to Pinterest
Labels: Review