Last Saturday, friends and I ventured out from NYC to harken back to a pastoral setting, yet satisfy our sea fever and ocean longings for salt spray and fresh, breezy air. Shelter Island, NY fulfilled our yearning for both.


At the tip of Suffolk County and carpeted with marsh and grassland greenery that is forever wild, the island, mostly wetlands nature preserve, has four bird watching and hiking trails. The narrow two-lane road around the island gently slopes and curves toward relaxing, light filled views of the water between tree lined shores that open onto a few sandy beach areas. Shelter Island "floats" in Shelter Island Bay which surrounds it on three sides along with Gardiners Bay on the fourth.

Situated between the North and South Fork of Long Island's eastern end, there are two ferries on and off Shelter Island. We drove to North Haven and took the South Ferry (5 minutes) to the island. When we returned, we took the North Ferry to Greenport (8 minutes) and drove home through Southhold and New Suffolk, quaint towns on the North Fork, before we eventually happened upon roads leading to the LIE. 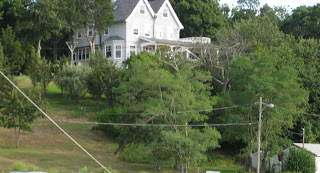 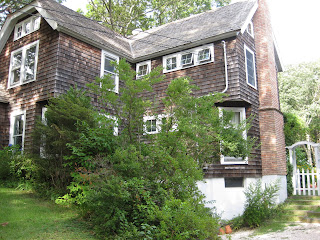 The ride out to this vast tract of land owned predominately by the Nature Conservancy soothed and diverted us from the anxieties of city living, for me the upset of finding a mouse struggling to free itself from a glue trap was the least of it. Quiet, clean, green spacious, open, free, unconfined by heat-baked, oppressive concrete, what a pleasure to view the wealthier Victorian section whose owners' uncompromising lifestyles, lawns sloping to the water's edge and views made us understand why, if money doesn't come through inheritance, then individuals struggle "to make their first twenty million" at a young age despite the grueling stress. Now more than ever.

Many of Shelter Island residents are summer dwellers (The population bloats to around 10,000, perhaps.) but some live there year round; since the 2000 census, I would imagine the population has not grown considerably past 2800 during the wintertime. There is evidence of land buying, building and development, not to the crass extent allowed in various areas of Long Island, the East end thankfully excepted. But developers are razing heaven and raising hell to do so, and it may be just a matter of another decade before Shelter Island is discovered by more than a few Yuppies and upscale gay couples who don't mind trading blunt and roiling winters crossing Shelter Island Bay for the insanity of pressed sardine populations in the city or the horrific boredom of the vapid, suburban, shopping mall nonexistence sandwiched between NYC and the East End.

No, there isn't a Starbucks on Shelter Island, but there is a cafe and a few upscale places. That is its utter loveliness, along with the secret, still wonder, the serenity of bird song and the whoosh of silence in your ears,totally soul refreshing and mind uplifting. Hey, come on! If you live there, you get your own cappuccino maker! Besides, Bridgehampton and Southampton are fifteen to twenty-five minutes away by ferry and a non traffic dense drive. What need have you of civilization up into your nostrils. You can get that online; the place, like everywhere, is wired.

Seven years ago into this beautiful enclave and forever wild island preserve came Michael Kinsey and his wife. And recently these proprietors moved their store to its current place conveniently next door to their residence in the town of Shelter Island after converting their barn into the new Black Cat Books. 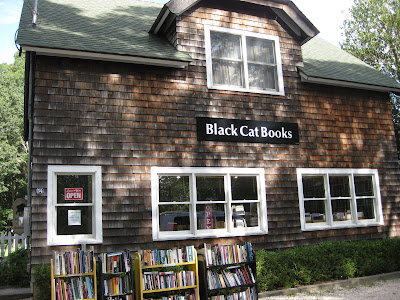 The store, which buys and sells rare and used books is named appropriately after their black cat which is 21 years old. This uncanny and aptly titled treasure has been around since the 1990s and it is really like no other. I'm not exactly sure why except that perhaps my reading and intellectual tastes may be similar to the proprietors? Perhaps I enjoy the idea the place can and never will be a Barnes and Noble? Perhaps because it reminds me of one element of the past (I hate nostalgia, by the way.) which I enjoy: there was a time when you could browse and look to your soul's content, sampling, picking up, savoring, then putting back with a revitalized interest in the topic of the book and then move on enriched with an inner thoughtfulness, almost like a meditation or prayer. I have always been moved to these feelings visiting Black Cat Books. 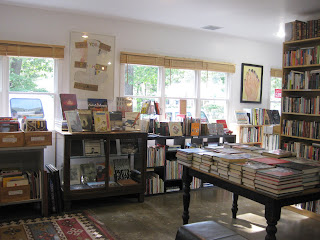 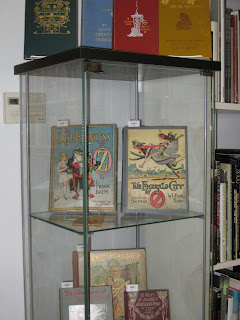 I serendipitously tripped over the place during a drive out to Sag Harbor with Est, my sister-in-law many years ago. There was a Java Cafe next door; the store was smaller and there were fewer offerings, but I enjoyed wandering through the sections unpressured by noisy crowds with uninterested friends or children in tow. It was better than a library with its Dewey Decimal systemed order; the order was the selection of the proprietors, what they enjoyed, what they felt appealed to them and others they knew, what they knew appealed to bibliophiles online. The glass bookcase with the first editions and signed copies of books fascinated me. The rare book section fascinated me. If you don't love books, you won't have these feelings. But I do. Books are souls. I love looking into others' souls. Often, in person, people are hiding. You don't even get to see the tip of the iceberg let alone it's girth below the water line.

Each year I would visit and bring friends. And then the store was gone from Sag Harbor and I was heart broken until I spoke with another shop keeper who told me The Black Cat Books was a success story in the up and down economy. It had moved to Bridgehampton right across from Starbucks. Well, I was in heaven; rare books and Starbucks, too? Again I brought new friends and bought a signed copy of Truman Capote's Other Voices Other Rooms and In Cold Blood and this was before the film about Capote came out. And over the past couple of years it had been there, I discovered a used copy of The City of Falling Angels, John Brendt's interesting reportage about the unique characters who peopled the Venice elite, during the unraveling of the destructive fire that destroyed La Fenice, Venice's ancient and beautiful opera house.

Then Black Cat Books was gone again. I had stopped to get a cappuccino in Bridgehampton and thought I would run across to the store to see what rare or used books had been added recently. There was a rude clothing shop in its place instead and when I asked neighborhood storekeepers, no one knew where it had moved. I truly thought the black cat had died, killed off by the economic winter. Then a friend checked online and found they had moved to Shelter Island. It was a perfect location...removed, rather remote, fun to get to and lovely solitude. It represented the antithesis of what was happening in the frantic and crazed book publishing industry with agents and editors not knowing how to get out of each others' way, with discredited, untruthful authors and Oprah network disappearance. (There is some rude justice to this. Technology is transforming the marketplace and jerking the chain of industry monopolies as the golden ring goes to innovators like Amazon who are on the cusp of "breaking through to the other side." Niche writers will be on top, after all is said and done with their e-publishing, self-publishing and self-marketing.) 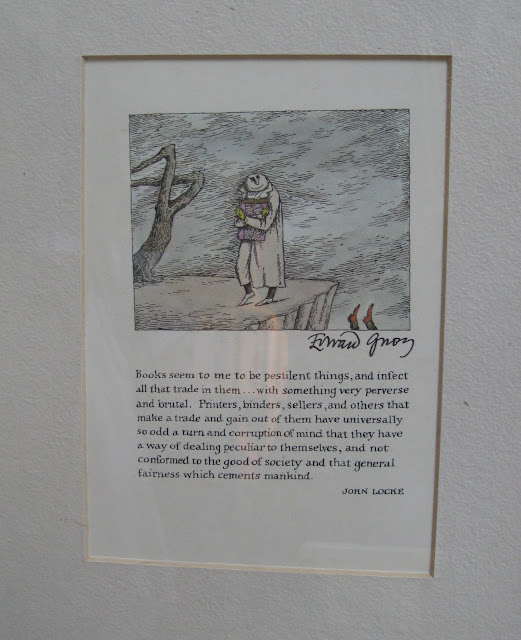 After stored items in the barn were removed, Michael and his wife set up The Black Cat Books. It's larger than the book stores were at any of the other locations. There are also a few interesting lithographs and prints for sale and you can sit there until the geese fly overhead in twilight and savor and sample as you lounge on the couch in the large room or talk to Michael who is very friendly, knowledgeable and helpful about the selections and reading lists. They have a blog and online website and continue to buy and sell used, rare and signed books.

It was a great visit and I found I had to be pulled away by my friend who was driving; we had reservations at Claudios the heart of Greenport, and needed to make the North Ferry in time. So we said goodbye to Michael and the rare books and first editions and we vowed to return for another lovely journey in the fall with the turning leaves.

I'm thrilled Black Cat Books is alive and well. And its namesake whose longevity is equally amazing and which has remained invisible to me as cats are wont to do with strangers, Michael assured me was lurking around somewhere on the grounds. In October when I'm out there to purchase a used or signed book, I'll take a picture of the cat if it lets me. Long life is to be honored and prized in cats and book stores. This seems especially so today after receiving an e-mail from Borders which is selling books at 50-75% off to empty all its inventory. So here's a brief word in remembrance of Borders and a celebratory congratulations to a book store that continues to thrive and bring solace and quietude to someone like me who is looking to escape the anxious, and at times harried and frenzied pace of NYC. 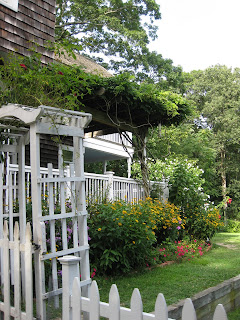 Email ThisBlogThis!Share to TwitterShare to FacebookShare to Pinterest
Labels: Review

Carole,
You are a wonderful photographer too! I feel like I took the trip to the book store with you. Dear friend, I wish I had.
Perhaps a trip to NY is in store while the Army leaves us on the east coast (:Till then, I hope to find you in another writing course!
http://www.benjity.wordpress.com