In April of 2020 when the COVID-19 pandemic was raging in New York, former President Donald Trump and the GOP embraced the Swedish policy of herd immunity. Read my updated article about Sweden's attempt to embrace herd immunity that I wrote in May and updated in January. Trump and the GOP "rationalized" that the economy could be OPENED UP. So what if people got COVID-19. They would get over it and build up antibodies to not catch it again. The concept ignored that COVID-19 was highly contagious and DEADLY. It ignored Long Hauler syndrome; those with COVID-19 went months and months never being able to be free of the virus, thereby spreading the contagion to others in the community. It ignored the idea that if businesses opened too soon, there would be an exponential spread of COVID-19 in the community. The spread would skyrocket the infection rate, and target the elderly in and out of nursing homes with exponential death rates to follow.

Early on, it was proven that the most vulnerable were the elderly in nursing homes. Right then, family could have taken their loved ones out of nursing homes and brought them home. However, if they didn't have the space to properly QUARANTINE their loved one from catching it from a family member, then that wouldn't work either. COVID-19 was an incredible risk. The possibility of death was high the older one was.

At the time much was uncertain about COVID-19. This was known by scientists and epidemiologists: it was 10X more infectious than the flu. It targeted the elderly in nursing homes. After further investigations, it was understood that asymptomatics from the community who worked in nursing homes or for nursing homes were the greatest spreaders to nursing homes.

SO. WHY WOULD ANYONE THINK THAT BREATHING THE AIR, DOING NOTHING TO STOP THE SPREAD, TELLING THE SOCIETY TO INTENTIONALLY CATCH COVID-19 WOULD PREVENT THE ELDERLY FROM GETTING IT AND DYING FROM IT, WHETHER IN OR OUTSIDE OF NURSING HOMES?

Well, that's what the Republicans and Trump were saying and encouraging: no mask wearing, having superspreader rallies and events, opening up everything, not doing a lot of testing, tracing, monitoring of those who had COVID. IN OTHER WORDS, DOING LITTLE TO CONTAIN THE COMMUNITY SPREAD MEANT THEY WOULD BE KILLING THEIR OLD PEOPLE IN AND OUTSIDE OF NURSING HOMES. DID ANYONE CARE?

THE BLUE STATES CARED. TRUMP/REPUBLICANS ONLY CARED ABOUT THE 2020 ELECTION. 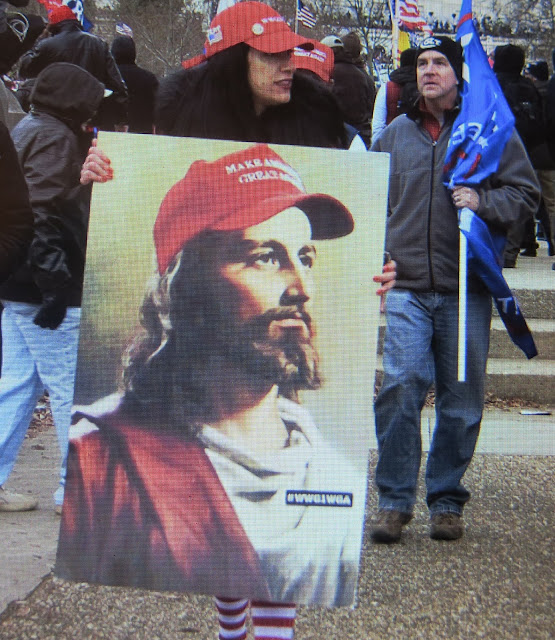 January 6th insurrection at the Capitol, QAnon Trumper (courtesy of the site)

These facts were known around May when New York, through the guidance of Governor Cuomo and his brilliant COVID TASK FORCE had brought the infection rate from the highest in the world to the third lowest in the country.  But Trump was not interested in facts. He wanted the illusion of the economy and everything else to be normal. In April, "Open" and "FREEDOM" became the QAnon, Trumper, white supremacist domestic terrorist militia mantras, so much so that armed domestic terrorists stormed state capitols demanding the governors stop the lockdowns with Trump chanting in concert to "free the people." The riot factor was so bad that Michigan militias stormed the Lansing, Michigan Capitol building, breached it and took possession until Governor Whitmer called in the National Guard to end it.

Little did any of us know that this was a dry run for Trump's inciting the January 6th riot at the US Capitol, attempting to free himself from the impending doom to follow months afterward in the coming indictments against him over a myriad of crimes he committed before, during and after being in office. His loss of the election of 2020 removed him from sheltering in a lockdown under the twisted Executive Privilege notion which should have been challenged, that "a sitting president cannot be criminally tried for his crimes." BUNK!

Now that Trump is OUT, he is being investigated for many crimes including election fraud in Georgia, and extensive financial fraud including tax fraud and campaign finance fraud in New York. Finally, in New York, his taxes (thanks to the Supreme Court) will be subpoenaed by DA Cyrus Vance of the Manhattan DAs office. However, Trump and his lackeys are ranging for revenge against New York State's Governor Cuomo. See yesterday's article for an in-depth discussion of this.

I wrote a number of articles about Trump's confused and negligent leadership acting like he was at war with CUOMO and the American people whom he wanted to breathe in the air and get COVID-19 which initially he called a hoax, then the flu, then the Kung Flu. By summer after a series of galactic blunders during abysmally rated press briefings, Trump abandoned even attempting to mitigate COVID-19. The numbers in New York fell dramatically thanks to Governor Cuomo's expert leadership which drove Trump and the GOP to frenetic QAnon heights slamming Cuomo about nursing home deaths while ignoring nursing home deaths in Florida, Texas, Arizona, Mississippi and other RED STATES.

Trump and the GOP, in love with the idea of herd immunity had Scott Atlas, the "herd immunity king" take a key part in the Trump Administration COVID-19 response. The COVID-19 rates rose as Trump and the GOP held superspreader events and rallies and "breathed the air." COVID-19 spread in the communities across the nation gaining higher and higher infection rates. One has only to look at WORLDOMETER statistics to gain an understanding about which states had/have high infection rates. New York, slammed in the Spring of 2020, controlled its rate in the summer and brought it to under 1% with a few days of NO DEATHS. No other RED STATE did that.

But that was hard to monitor because Trump made sure to have RED STATE governors quash the number of deaths, active cases and positivity rates. All of this is changing under President Joe Biden Jr. and his team. Once they straightens out the horror that Trump left with his herd immunity policy and abdication of leadership the last 8 months of his presidency regarding mitigating COVID-19 and establishing a well organized vaccine rollout, the Biden administration will assess the numbers in each of the states.

The Swedish herd immunity followed by lobbyist Scott Atlas was a canard. First, we do not have socialized medicine. Second, Sweden's population is around 10 million. Ours is 334 million. Third, we have a multicultural society; the demographics have no relation to Sweden. So the idea to use herd immunity was predicated, not because of the similarities between Sweden and the US, but because Trump was concerned about reelection and he was lazy and incompetent to lead. The economy was his "Ace in the Hole." With ignorance, he equated Wall Street with the economy, whereas Main Street was largely forgotten. The economy is both.

Since the pandemic, businesses, restaurants, mom and pop shops in cities and small towns have been badly hit and most have gone under, no thanks to Trump's corrupt management of the PPP which gave huge loans to the wealthy and stiffed everyone else. Millions and millions are out of work; the Main Street economy was and still is smoking like the aftermath of a California wildfire.

As Governor Cuomo rightly suggested, one is able to mitigate the spread of COVID and open the economy and rebuild the economy by doing both gradually. However, Trump/GOP decried Cuomo and used QAnon, Russian Military Intel Soc Puppets, the RNC shills and Trumpers to fight against Cuomo's and BLUE STATE governor's wisdom in leading their recovery. And Trump, the RED ultra right-wing media, QAnon, Trumpers and misled Democrats even now scream "nursing home deaths" at Cuomo and impugn him and his team for dastardly, horrific actions.

This is outrageously hypocritical in light of Trump and RED STATE governors' "herd immunity" policies and complete incompetence and depraved indifference with regard to MITIGATING the COMMUNITY SPREAD of COVID-19 with their delinquent actions. They refused to enforce mask wearing. They allowed "open" economies without social distancing or masking. They encouraged folks to gather in crowds, bars and restaurants and superspreader events to "breathe the air." They justified these actions by saying everyone should get COVID-19 to breathe the air; this was after they promulgated that COVID-19 was a hoax/the flu/an exaggeration.

Cuomo's action and intent to lower the community spread with his network of surge and flex, his massive testing, tracing and monitoring of COVID IN THE COMMUNITY, to lower the spread, shows a diligence and care for all the communities throughout the state. Because if you care about all the communities in a state and keep the infection rate low, the greater the likelihood the deaths of the elderly in an out of nursing homes will be low.

That the RED STATES, TRUMP, RED UBER RIGHT WING MEDIA, QANON CONSPIRACIES, TRUMPERS, MILITIAS, KKK, WHITE SUPREMACISTS ON LONG ISLAND AND ELSEWHERE IN NEW YORK STATE AND ACROSS THE NATION COULD LAUD POLICIES OF HERD IMMUNITY AND SACRIFICING THE ELDERLY TO OPEN THE ECONOMY THEN TURN AROUND AND SLAM GOVERNOR CUOMO AND OTHER GOVERNORS FOR THEIR MASK MANDATES, CAUTION ABOUT OPENING THE ECONOMY TOO SOON AND RESTRICTIONS TO SAVE LIVES...THEN SPEAK ABOUT NURSING HOME DEATHS???? THIS IS A MONSTROUS HYPOCRISY.

The hypocrisy screams to GOD AND THE HEAVENS. Investigate, by all means. But you who are without sin, among you, RED STATES, GOVERNORS, REPUBLICANS? You are innocent? No! Cast the first stone, immersed in your own guilt. THE RED STATE active COVID cases on Worldometer speak volumes. INVESTIGATE YOUR OWN NEGLIGENCE IN NURSING HOMES, RED STATES. You have high infection rates in your communities without doing due diligence in mitigating the spread. That means for a fact, your nursing home deaths are in tandem, high. And it means your elderly deaths outside of nursing homes are high.

CALLING ON RED STATES. Where are your investigations? Where are your people clamoring about nursing home malfeasance? Your policy of herd immunity was and still is indecent, monstrous, cruel and hateful to the elderly in and out of nursing homes. HYPOCRISY? Yes OAN, FOX, SPUTNIK, TRUMPERS, DOMESTIC WHITE SUPREMACIST TERRORISTS, SOON TO BE INDICTED TRUMP, ROBERT MERCER'S PARLER, BREITBART, NYP AND ALL RIGHT-WING LYING FANATICS WHO CONDONED THE DEATH OF THE ELDERLY FOR THE SAKE OF TRUMP WINNING THE ELECTION. Report your numbers RED STATES without obfuscation, if you dare. Bill Barr only asked for a report of BLUE STATES in the summer to LEVERAGE FOR TRUMP AGAINST THE TERRIBLE JOB HE KNEW HE WAS DOING. And then Bill Barr was fired because he was unable to stomach Trump's lawbreaking and intimidation and violence in his urge to overthrow the election of JOE BIDEN JR.'S WIN.

What of Atlas' and Trump's and Republicans' and right-wing media's violence to the elderly in their embrace of herd immunity that skyrocketed the infection rates and community spread that infected and killed the elderly inside and outside of nursing homes? Herd immunity and "catching COVID" to sacrifice the elderly for the economy, embraced by the GOP, uber right-wing media, Trumpers, QAnon conspirators are a SHAMEFUL BLOT ON OUR HISTORY. That is a BLOT along with the high numbers of black and brown communities who died of COVID. Such depraved indifference and lack of humanity can only be attributed to the cruelty and unpatriotic actions of a wanton party of Republican miscreants, not worthy to lead the American people. They must be voted out, everyone who supported Trump in his wide journey of genociding the American people.