Trump's attempted coup, ordered, organized by Trump and others. (the site)     The Coup attempt on the US Capitol on January 6, 2021 was encouraged by individuals in the DOD when they did not immediately send in the National Guard to assist the Capitol Police. As a result they sustained violence and couldn't stop the breach of the Capitol. Assistance arrived over three hours later. With that negligence, five people died, 150 capitol police were traumatized and badly injured, Brian Sicknick fatally. The horrific violence and chaos unprecedented in the history of the nation resulted in 800 arrests, thus far.

The DOJ (also probably crawling with Trumpies and white supremacists, white nationalists, KKK and coup supporters) has been nearly negligent in not moving quickly to arrest congressmen on record supporting the coup. The congressmen violate the 14th amendment and they rescind their own oath of office assisting Trump to void the votes of those who gave Biden a landslide win. These in congress and some in the senate are traitors. They cannot adequately administer their oath of office while supporting insurrection which that oath vitiates. 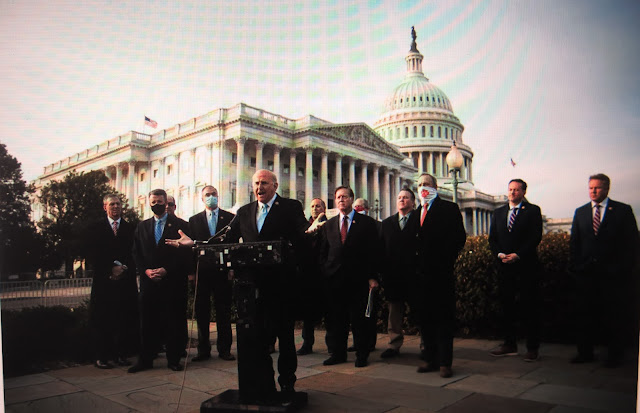 Like the old corrupt Ukraine (see Servant of the People) which promoted theft, no corrupt officials who stole from the citizens were ever judged in court. A convenient excuse to NON PROSECUTION was a "lack of evidence." A lie. The judges were paid off. In the US instance it is apparent that the DOJ may have Trumpers within that use the same excuse; not enough evidence to prosecute. Liz Cheney and pundits have said there is enough evidence for indictments. Legal authorities have said there is enough evidence. The DOJ is not only slow to act, it appears that their excuse like that of Alvin Bragg in NYC investigation against Donald J. Trump states the same: THERE ISN'T ENOUGH EVIDENCE TO CHARGE JUST YET. 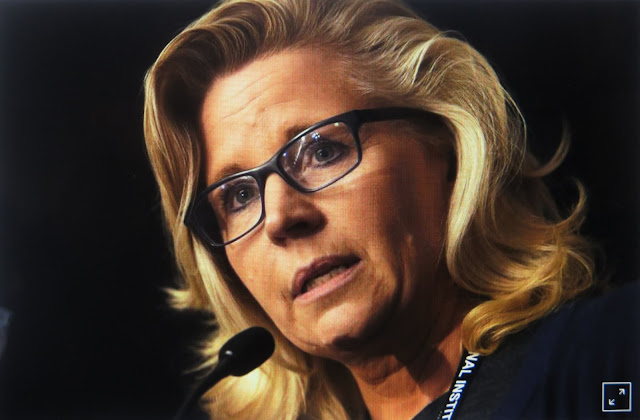 Liz Cheney voted to impeach Trump for treason of the attempted coup. She states there is enough evidence to charge him and others for the coup attempt.

In both instances, the DOJ charging Trump and congressional coup plotters and Alvin Bragg's investigation, there is enough evidence. In the first instance, Liz Cheney tells us so. In the second example of Bragg, two prosecutors resigned to make the point that Bragg lacked the will, the guts to prosecute Trump because there was enough evidence. In the case of the DOJ, Merrick Garland's slowness and self-righteous attempt to be pure is helping Trump/Republicans. His self-righteousness, a deadly virus of Democrats is JUSTICE DENIED. In the case of Alvin Bragg, a Democrat, caught with his pants down, ass exposed by the two resignations, Bragg made mewling comments about continuing the investigation. No seasoned prosecutor resigns in protest, except to send the message that the DA is corrupt. Bragg is corrupt? Garland is negligent and incompetent? 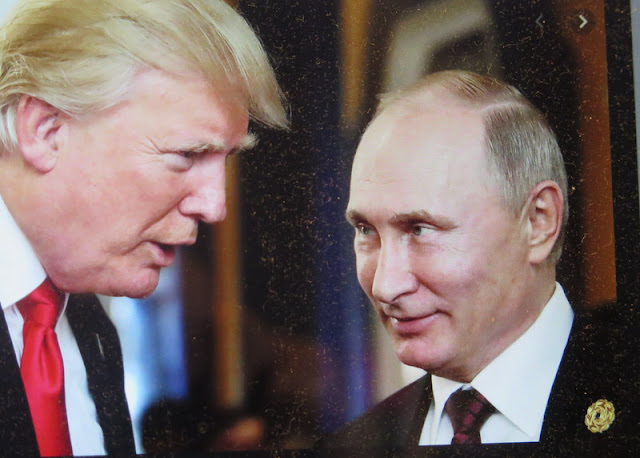 What did these two conspire on during Helinski? Putin's War on Ukraine, dissolution of NATO

DELINQUENCE AND DELAY IS JUSTICE DENIED. NOT ENOUGH EVIDENCE IS AN EXCUSE USED TO DENY JUSTICE.

THE SAME (REPUBLICAN) ROT IN THE DOJ AND IN BRAGG'S OFFICE IS IN THE DOD.

Michael Flynn's brother works at the DOD. Have we not forgotten? Michael Flynn was pardoned by disgraced coup plotter Donald Trump as was Roger Stone, both of whom were present at the Capitol rally on January 6th as they plotted to overthrow Joe Biden's win of the 2020 election. Surely, Michael Flynn's brother provided conspiratorial help in the DOD. Proof? Insurrectionists were allowed to overrun the Capitol wreaking destruction and threatening legislators. Flynn's brother made up excuses about sending a "BAD IMAGE" if the Guard went in. THIS BULLSHIT IS LAUGHABLE. The bad image is to Trump and his insurrectionists. Is anyone investigating FLYNN'S BROTHER? Clearly, Michael Flynn is a Putinista (see the 2015 picture of him sitting at Putin's table at the RT Gala), as is Paul Manafort who helped install Putin's Ukrainian puppet who was then outsted during Ukraine's Orange Revolution, freeing Ukrainians from Putin which precipitated his invasion of Crimea in 2014.

And that War in Ukraine in 2014 has led to the larger War in Ukraine now. Ukraine is the canary in the coal mine of the DOD. Why has it slow walked policy to help Ukraine? Is it filled with Putinista Trumpers who support Putin's Stalinistic communistic terrorism killing women and children? This slow walking that began after Putin gave Trump the 2016 presidency has been encouraged by Trump/Putin who conspired in Helinski, Finland during a two hour meeting that no one, not even the translator on either death threats or handsome payouts, ever translated for the American public. What did they discuss? Those notes of that meeting never emerged to the light. Why not? How much money was Trump promised personally? What was the quid pro quo? Clearly this is the very appearance of criminal behavior and treason that Trump refuses to bring to the light and no one in a position of power is even seeking. Where is the DOJ and other investigative agencies?

Perhaps the DOJ should hire another 5000 attorneys and investigators to get to the bottom of this. That would be money well spent. Where will they get the money to investigate the Putin/Trump Helinski meeting? Unfreeze Russian money held in sanctions for Putin's War in Ukraine, and as Lawrence Tribe says use Russian money to pay for Ukraine's weapons. And I would add hire attorneys to get to the bottom of the Trump/Putin conspiracy and treason and to complete the Mueller investigation into Trump/Putin payoffs which Mueller never investigated because Robert Mueller lacked the will to stand up to the AG Barr, Trump's lackey and Trump.

THOUGH TRUMP IS NO LONGER PRESIDENT, SUPPORTERS IN DOJ AND DOD WANT DELAY AND MOST PROBABLY ARE THE ONES PUSHING DELAY. JUSTICE DELAYED IS JUSTICE DENIED. UKRAINE DELAY IS UKRAINE DENIED.

Meanwhile, Republicans RACED TO CALL HILLARY A BABY EATER (Taken out of the annals of Ukraine's history of Holodomor when in 1932-33 Stalin confiscated all Ukraine's grain and starved Ukrainians for their audacity to want to be a republic and split from Stalin's Russia. Widespread reports flourished that some Ukrainians ate their babies and resorted to cannibalism. This lie about Hillary Clinton was created and propagated by Putin's Russian Military Intel to help Trump win the 2016 election. The lie about Clinton's cannibalism was propagated via QAnon (Russian Military Intel fueled propaganda) to much success, though Clinton won the popular vote against Donald Trump in 2016.

Democrats predominately have not been found guilty of crimes. Trump/Republicans have gone to jail. Trump pardoned his crony criminal friends. Under Republican administrations there have always been many times the indictments and prosecutions than there are with Democrats. Trump is the apotheosis of grifting, the president most sued in history, many times over other presidents. He is in 19 court battles presently, being sued for financial improprieties, tax evasion, fraud and his fomenting the coup of January 6th. Though he denies accountability, he is most assuredly responsible, because during his time on this planet after he was running the Trump Organization and then when he was in the WH, nothing moved unless he ordered it to, whether softly or in a rant. 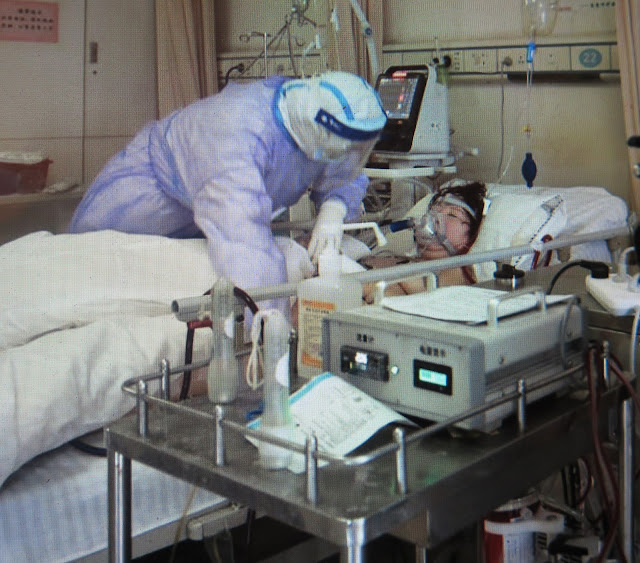 Over 1 million dead in the US of COVID. The US got off to a terrible start. Trump's herd immunity policy contributed to targeting seniors who COVID targeted first with high community spread rates.

The US is still suffering under the weight of Trump's criminally negligent botch job politicizing COVID and causing many more thousands of deaths than Hillary or any other Democrat had they been in office when COVID hit in 2020. We have over 1 million fifteen thousand deaths to date. Trump only values his own flesh. Most Democrats are servants of the people. Trump the pig at the trough keeping others away, only serves himself and looks for quid pro quos. He was the perfect Putin compromat.

That is why Trump is against Zelensky and Ukraine because Putin is against Ukraine. That Putin is a genocidist communist terrorist doesn't matter to him; Trump wants money. IT IS STOCKHOLM SYNDROME. HE IS A WANNABE ENAMORED OF PUTIN'S POWER AND MONEY. But make no mistake, his white supremacist followers in the DOD AND DOJ support him. JUSTICE DELAYED IS JUSTICE DENIED. UKRAINE DELAYED IS UKRAINE DENIED. DENY UKRAINE AND YOU PLAY INTO PUTIN'S COMMUNISTIC STALINISTIC WISH TO BRING BACK THE OLD USSR. By extension Trump supporters are Putin's, meaning they are terrorists, communists, Stalinists. To suggest anything else is a blindness this country can't afford.

PROOF? Trump was impeached for blackmailing Ukraine's President Zelensky by not sending over $400 million in weapons for Ukraine's fight against Putin. Clearly, he favored Putin and disfavored Ukraine which he tried to smear continually saying Ukraine interfered in the 2016 election instead of Putin, an abject lie. Hunter Biden's laptop was another smear against Ukraine slated to make Biden appear corrupt. Did this come of the Helinski meeting? Or are Putin and Trump in constant contact on a Burner phone or on What's App? Clearly, Trump bows to Putin; Putin's war on Ukraine was "genius." Terrorism and GENOCIDE are genius. Trump is clearly a Stalinist like Putin supporting genocide. But then his father supported Hitler. Money is what matters. Women and children dying don't matter; that's why he appointed Steven Miller whose policies at the Southern border were cruel and brutal.

In the past VP Biden supported Ukraine. In the present, President Biden was the first NATO leader who called out Putin as a KILLER and called out the war crimes and genocide in Ukraine as Putin's brutality. Hillary Clinton supported and still supports Ukraine. President Obama still supports Ukraine. On the other hand Republicans have been slow to show their support once Trump entered the picture. In fact Trump has numbers of individuals that support him in the DOD (white supremacists, KKK, white nationalists, anti-Obama and Biden folks) who thus don't support Ukraine. He has supporters in the DOJ. These individuals are not civil servants. They are partisans and need to be fired, beholden to Trump, lying on their oaths to the constitution, traitors to the US, if they put Trump first.

American tax payers are paying for CIVIL SERVANTS to do a job. They are not paying TRUMPERS WHO ARE NEGLIGENT PUSHING THE REPUBLICAN AGENDA. These negligents must be called out. Trump fired Democrats who were competent civil servants merely because they were Democrats. Biden needs to remove the Republican negligents.

One example is the Tampa Judge, a Trumper who has blood on her hands for removing the mask mandates on flights, etc. The BAR association said she was unfit for the job; Trump raced to put her in because she was his and unfit, a negligent. Likewise the fungus which she and other Trumpers represent should have been removed or not allowed to flourish. The Biden Administration needs to look to the saboteurs around them who are not civil servants, but are liars and negligents. They must be removed because they will sabotage the Biden agenda, something which Republicans have attempted to do at every turn. Republicans prove themselves talkers about nothing and doers of their own agenda which covers two things.

1)reelection by any means necessary

2)money in their pockets to become like the 100 billionaires they serve.

Republicans are not servants of the people. They are only in the House/Senate or other positions to serve themselves.

DOJ AND DOD REPUBLICAN MOLES MUST BE OUTTED FOR NEGLIGENCE. THEY MUST CORRECT OR RESIGN. JUSTICE DELAYED IS JUSTICE DENIED. UKRAINE DELAYS ARE UKRAINE DENIED.