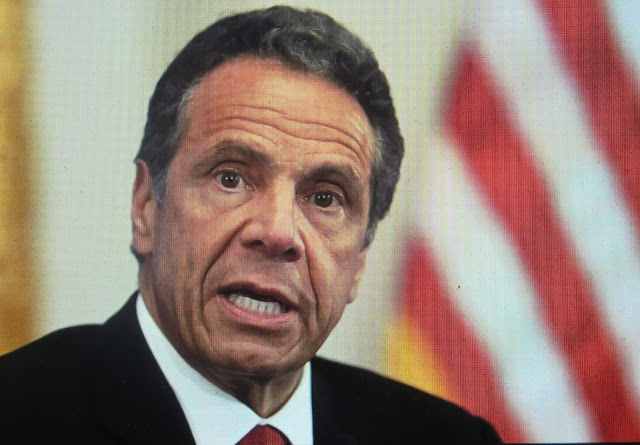 In an article, Cuomo's Small Donors Steadfast in Their Support...by Michelle Del Rey published in the Albany Times Union today, January 26, 2022, the reporter's contention is that voters show their support for the former Governor Cuomo with small donations. To me that support reads a number of ways. First, not only do these supporters reveal their appreciation of the former governor during the pandemic. He was the only effective leader in the nation for months, despite the obstacles and lies thrown at him by the Trump/Republican botch job. His leadership guided New Yorkers to bring down the highest infection rate in the world to the third lowest. With inspiration and hope during a hellish time that no one in the Baby Boomer generation had faced before, Cuomo guided New Yorkers, the nation and the world in his daily briefings. He uplifted, he cautioned, he supported the nations while Trump proved paranoid, ineffective, mendacious (lying) unjust and noxious, supported by Republicans who sat and watched him make mistake after mistake and tell lie after lie.

Cuomo supporters in New York and nationally will never forget he saved our lives as Trump screamed about taking bleach, Lysol and dangerous chemicals (hydroxychloriquine) that confused the public  and killed one couple (looking for over the counter hydroxychloriquine). And Trump delaying action for months (read Rage by Bob Woodward) and knowing about COVID's danger, with other Republicans, bought stocks and made money, while the unknowing public spread the virus asymptomatically. No one who lived in congregate settings in Queens, the global epicenter of COVID will forget Cuomo's diligence, skill, professionalism to guide them (despite the hell Trump gave him, and the lies of the Republican party falsely accusing him about Nursing Homes to discredit and oust him). Cuomo was a thorn in Republicans' sides. Trump wa, paranoid Cuomo would run for president (he would have won because of his great leadership during this terrible time).

Instead, Trump/RNC went after him via Republicans in New York who also turned the heads of some Democrats who saw a wonderful opportunity. That the voters watched this and believed in the former governor's actions, words and team as they compared him to Trump/Republicans and Red State governors, is what New York voters understand and remember today. Sadly, the NY Democrats have made a miscalculation. In attempting to drum up hatred for the former governor, the opposite has occurred and will continue to occur. It is obvious why.

AG James, Ron Kim (who went on Fox and demanded Cuomo be impeached) Joon Kim (a long time former prosecutor stalker of Cuomo) and Anne Clarke (a biased lawyer who specializes in sexual harassment readings into gestures, words, glances) encouraged the women to testify what they interpreted as sexual harassment. None of it rose to criminality and most of it was spurious and the testimony not credible. Spurred on by colleagues, etc., James cherry picked from the 179 transcripts of all those questioned and excluded testimony by credible witnesses that refuted or called into doubt the women's accusations.

In the end, the pickings were slimmed to 41 transcripts. What remained was to configure the transcripts, with lies of omission and twisted interpretations and redactions to set up the former governor as a "toxic sexual harasser." Thus, the conclusion was set. Delivered to the press strategically in daily installments, it was red meat to cannibalistic Murdock's NY Post, The Wall Street Journal and other RED MEDIA (SPUTNIK, OAN, RT, NEWSMAX, FOX). The Daily News and NY Times, CNN AND MSNBC jumped on not wanting to be left out, for surely, Cuomo was "guilty." Wasn't he? Was anyone looking behind the allegations?

Meanwhile, the former governor was not on trial, though the RED MEDIA acted that he was in their headlines, and blue media in their '"breaking news." (A criminal charge was made to coincide with AG James' announcement she was running for governor. Interestingly, either she or Sheriff Apple leaked this to the press, though it was Grand Jury testimony, a no-no). Someone committed more than an illegal infelicity for political purposes.

Attorney Rita Glavin has responded to AG James' one-sided, sloppy and shoddy investigation and pre-meditated "final report," which James has refused to correct allowing lies of omission and commission to stand. Indeed, James claims Glavin's response is "an attack" on her, and she uplifts the "poor victims." Meanwhile, if one listens to Glavin on YouTube, reads the women's comments Glavin presents in her power point presentations, sees into their background (Charlotte Bennett adding Cuomo is a lying three time serial sex harassment accuser) reads their tweet threads (just recently released to Glavin though she has been asking to see them as due process for the former governor for months) and reads the bullying background of Lindsey Boylan's threats to get her way and witness tamper or solicit witnesses, one cannot help but think something is rotten in the state of the NY AG's office.

Voters who continue to support the former Governor give their money despite the report, However, many are suspicious of the rush to judgment to oust him, when investigations into Donald Trump's finances, harassments, rapes, predation have taken years and have, like the Jeffrey Epstein suit in Florida, been buried with dark money kick backs most probably. Why else would State Attorney General Alex Acosta give Epstein a plea deal that amounted to a daily party to continue his machinations as he was allowed to go home and only return to prison at night? The former Governor Cuomo's insistence that he be investigated, that the truth of his innocence will out, is not Donald Trump's MO. Trump evades investigation and screams witch hunt at every time because he is guilty.

Voters know the difference. The comparison is appalling. Trump's refusal to take responsibility for his actions, his refusal to apologize and admit fault is presumptive guilt. No wonder why voters support the former governor who apologizes and admits fault. However, when he is falsely accused for political purposes, he will fight back through Attorney Glavin.

It appears obvious that AG James got sidelined when opportunity raised it's pretty head and that and most probably coaching and solicitations spun her head around and against Cuomo to produce a "guilty" product that leaked to the press would turn him from "the love gov" to a "leering, sexual dirty old man predator." Oh the poor victims, the poor victims. When you think victim, think the teens abused by Jeffrey Epstein, Trump's close pal. Think E. Jean Carroll, who Trump allegedly raped in a department store. Why would Cuomo tell James to investigate him if he were a "groper?" The man has the legal mind of a steal trap. But unfortunately, he is an innocent when it comes to the wickedness of his accusers, one of which stated about him in a text to the effect that...the former governor "has no idea of the web that he stepped into." What web? Who are the spiders? Why that metaphor? Double, double toil and trouble? Indeed!

Voters support the former governor. The press must write articles about Attorney Glavin's findings on YouTube, which you can see after Michelle Del Rey's article reprinted here.

Nor did they bother Ina Fritz in Pateros, Wash., Martin Pellumbi from the Bronx, Robert Coffman of New York City or a Southern California woman who agreed to speak to the Times Union on the condition of anonymity.

In fact, Odom, a retired director at a center for at-risk youth, referred to them as a “farce.” As Odom put it, the accusations didn’t “sound like sexual harassment to me.”

Even after Cuomo resigned in August in the wake of a state attorney general’s report that concluded he’d sexually harassed multiple women, his support has remained steady among those who have dismissed the scandals that engulfed him as overblown or politically motivated.

That reverence was, in part, buoyed by nationally televised press briefings that Cuomo gave during the pandemic, and for many of his supporters it has also translated into donations, according to his campaign filings made public last week.

Indeed, the aforementioned supporters all have made small donations to Cuomo’s campaign — even though he has given no indication of running again for public office — with the largest single donation among the group at $100. Some of them were recurring.

Before he left office, the governor had been known to take big contributions from special interest groups, including industries with business before the state. Those dried up after the allegations surfaced.

Cuomo had previously struggled to attract small donors. In 2018, it was reported that 7 percent of the small donations that trickled into his campaign account were $1 contributions from someone that had the same address as one of his aides.

However, this time around, Cuomo didn’t need his staff’s family to boost his now-$16 million campaign war chest. After he started his daily COVID-19 briefings in early 2020, the governor amassed a legion of loyal supporters nationwide.

The money took care of itself. Filings show that the governor has raised almost $32,000 in small donations since his resignation on Aug. 10.

Fritz, 67, a retired quality control professional on the West Coast, was captivated by the daily press conferences that she watched with her rescue dog by her side.

Odom, 73, also watched the daily briefings and felt like Cuomo led the nation, relying on him more than she did her state’s own governor, Henry McMaster.

“The governor had so many positive things, and things you could do to not get this disease,” she said. “It was reassuring.”

The anonymous donor in California, a retired nurse, found Cuomo to be more favorable than former President Donald J. Trump, who at one point suggested that injecting disinfectants to ward off the virus might be worth examining, since they kill the virus on surfaces.

“I couldn’t believe that was actually coming out of our president’s mouth,” the donor said. “There’s a reason why on a bottle of bleach there’s a warning to not ingest it.”

In search of guidance, she began tuning into the Cuomo briefings. She found them calming, alleviating the stress she felt from a chaotic global pandemic.

“I can’t tell you how relieved I personally was that here was information that I could understand from my nursing point of view,” she stated. “And I thought, finally, somebody is speaking truth to power.”

In the Bronx, Pellumbi, a 55-year-old electrician, said he’s willing to give Gov. Kathy Hochul a chance, but would “absolutely” support Cuomo in another election.

What sets him apart from the other donors is that he’s on the fence over whether Cuomo sexually harassed multiple women. “I believe that a man has no right to touch a woman without her permission,” he said. “I believe he should know that, too.”

Different donors said they believe there wasn’t any proof to support the accusers’ claims, and said they thought the state attorney general’s report was “flawed.” One referred to the accusations as “character assassination.”

Coffman, 72, has been supporting the Cuomo family since 1977. He remembers when Andrew Cuomo won the Democratic primary for the attorney general’s race in 2006. He went down to his campaign headquarters and kissed him, he recalled.

Coffman said he plans to continue donating to the campaign and is optimistic about a potential run for public office by Cuomo.

“He ain’t dead yet,” he said. “He’s going to be resurrected to come back and play a significant role in New York state and American politics.”

All of the donors said they’d either stand behind the governor or wouldn’t mind supporting him in another gubernatorial or presidential race.

Some said they plan to continue donating, in hopes of a comeback.