Cuomo Smear Campaign: GOP Ratf**king and ITS OWN PROJECTION OF SINS


In previous posts I pointed out that Trump's botch job on COVID -19 was carte blanche for the virus. Trump knew of COVID before last February; in documented tapes he told Bob Woodward how deadly the virus was. (Read Woodward's book Rage.) For his own political purposes he did little to stem COVID'S spread, unlike what President Biden has done since he's taken office. Trump lied saying it was a hoax and then the flu. Such lies persist today, as well as lies about the vaccines and about the purpose of COVID-19. (It was/is A plot to get him out of the White House and a plot to enslave the American public with chips in the vaccines...lies that persist to today in Trump's mind.)

Trump perpetrated these lies amongst his QAnon (Russian Military Intel) followers, Trumpers and Republicans. They encouraged Americans there was no hideous novel COVID-19 and that they should breathe the air and get the "flu" to become immune( A GROTESQUE LIE.) He did this all the while knowing how dangerous COVID was; even admitting to Woodward on tape that it impacted children. As COVID-19 rampaged the Northeast entering through Newark and JFK airports, Trump assembled his RED STATE governors with his plan to be reelected: they should lay low and go with his program. His strategy was to win the 2020 election by slamming Blue STATES with COVID, blaming Democrats for HIS botch job, while he skied past accountability, touting the fabulous job he was doing in his rambling, lying briefings.

RED STATE governors and the GOP accommodated Trump. As a result, over the following year RED STATES covered up the truth of their COVID infection rates which skyrocketed when they didn't have to. They covered up their deaths. They covered up their nursing home deaths. All of this happened in order for Trump to use the terrible COVID-19 deaths in and out of nursing homes to tarnish Blue State Governors. It didn't work. They still try to tarnish Governor Cuomo with this lie. It's a lie. And regardless of how they twist it, if Trump had stopped COVID-19 in its tracks with decisive action early on facing the truth and telling Americans, the infection rates would not have spread throughout the communities of New York, thereby not as readily targeting seniors in and outside nursing homes.

Trump and the GOP's dilatory non actions against COVID created high infection rates that spread everywhere. The high infection rates immediately went into nursing homes and killed. The only way to stop the killing was to lower infection rates which CUOMO ENCOURAGED NEW YORKERS TO DO. The only way at the time was to WEAR MASKS, PHYSICAL DISTANCE, STAY AWAY FROM CROWDS, ETC. New York was under COVID siege, the first time in history and in the 21st century. But Cuomo rose to the occasion and UNLIKE ANY OTHER GOVERNOR, BROUGHT DOWN THE INFECTION RATES IN THE STATE FROM THE HIGHEST IN THE WORLD AT ONE POINT (CAUSED BY TRUMP AND THE RNC) TO THE THIRD LOWEST IN THE US. 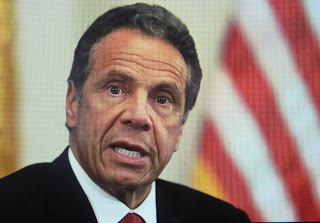 Trump, Trumpers, GOP rhetoric was a contradiction. How can you proclaim "OPEN" and NO MASK WEARING, create massive infection rates and not kill people? You can't. The high infection rates everywhere targeted the seniors in and outside of nursing homes. Thus, Trump and his RED STATE governors were directly responsible for high infection rates in the community which KILLED seniors first. When he hired Scott Atlas, a proponent of "breathing the COVID air" to effect "herd immunity" in other words, everyone gets COVID, they sealed the doom of senior citizens in every state in the nation. DOOM. Seniors died because folks who worked in nursing homes brought in COVID. Many were asymptomatics. The elderly breathed the COVID air and died in large numbers in RED STATES. But you won't know this because they undercount deaths and infection rates.

Any of  1-6 above identifies one as a Republican. Don't look at labels, look at actions. And look at Governor Andrew Cuomo and other BLUE STATE governors to see where their heart is toward the American people. First, RED STATE governors suggested that the elderly should be sacrificed to open the economy. The Lieutenant Governor of Texas stipulated that and it was reiterated on Christian TV. The old lived their lives; die of COVID, but open businesses everywhere. No one would mind.

On the other hand, Governor Cuomo and Governor Whitmer and other BLUE STATE governors closed down their states. What was the result? Fewer elderly died than would have. Fewer people died than would have. Fewer people got COVID-19 and saved the hospitals from becoming overwhelmed as is happening in Toronto, Canada. What did the RED STATES, Republicans and Trump do? Ignored the great job the BLUE STATES were doing because their strategy was to SMEAR and RATF**K BLUE governors while covering up Trump's botch job pushing MAGADEATH from COVID-19.

The RATF**KING has been continued though Trump is out of office. It is being perpetrated by the GOP and RNC to push for a win in 2022 and 2024. Does it matter to them that this SMEAR is an outright lie? NO! Does it matter to them that they have proven that they would rather Americans die of COVID than lead through this national health crisis? NO. Do they care about the elderly? HELL TO THE NO. THEY ADVOCATED THE ELDERLY SHOULD BE SACRIFICED SO BUSINESSES COULD OPEN AND BE FLUSH WITH CASH.  Did they plan to open slowly in a concerted effort to contain COVID yet bring back businesses not sacrificing anyone? NO.

Are Republicans and Trumpers getting vaccinated? NO. However, it's been reported that Trump, his family and friends have gotten vaccinated. Republicans tout that they are not getting vaccinated. However, they are COWARDS. Most probably a vast majority of Republican politicians are vaccinated. They should tell the Trumpers and QAnon believers among the American people to get vaccinated. They won't. By the way, they have also heavily invested in the companies making the vaccines, though they excoriate them for putting chips in the vaccines to monitor Americans. As usual, as Trump does daily, they speak out of both sides of their mouths. They do this while tarring and feathering those like Cuomo, Whitmer, et. al. for speaking one truth and trying to save lives and get the economy up and running.

Republicans plan to win in 2022 and 2024. Thus, they have gotten Democrats to join them in RATF**KING for political purposes. In New York, Senator Gillibrand, Representative AOC and others have joined the RATFU**ING. They have called for Cuomo's resignation, regarding his alleged untoward advances toward highly political women with agendas that look strangely Republican. Thus, Democrats are stupidly, wantonly throwing out the progressive agenda of Governor Cuomo by siding with Republicans who have led the charge of "ratfucking" Cuomo. And this is picked up by media, which despite the labels of being moderate, are Republican and uber-right-wing biased for political purposes. Picking up the lie about Cuomo and running with it are Republicans. Any media outlet who carries those smears, despite what they characterize themselves to be  REPRESENT THE GOP, TRUMPERS, RNC. Republicans enjoy RATFUCKING.

Governor Cuomo's incredible journey in helping New Yorkers mitigate COVID is for the ages. In his book he writes about leadership and how to tackle COVID. Republicans are infuriated about his book because he excoriates them and Trump. As a result, they push reporters to ask embarassing questions to destroy him. It's another example of SMEARING ONE OF THE ONLY POLITICIANS WHO CARED AND LED THROUGH THE PANDEMIC TO SAVE LIVES.

This should never be forgotten. However, the RNC and GOP want other news to occlude these facts. Thus, a reporter named Peter who has been kept safe by the Governor slammed him yesterday in a briefing...trying to smear him with #metoo allegations. Tragically, this reporter is a creature of the paper hunting for bear. Tragically this reporter is owned by his editor and is not even his own person.

Nor do they take responsibility for the fact that 70% of Americans despise Republicans for hating them and wanting them to die. Republicans try to walk between the raindrops. They ignore the truth. Their only policy is to obstruct Democrats who help Americans and the nation; they obstruct democracy; they hate the constitution giving the people the right to their voice. They love power and money and don't stand in their way or they will kill you. (Watch what they say, not what they do. Look at the COVID NUMBERS. LOOK AT THE GUN SHOOTINGS OF CHILDREN. LOOK AT THE NUMBER OF BLACKS KILLED BY POLICE. LOOK AT THE CHILDREN'S DEATHS AT THE BORDER. Oh, there are deaths? What did I say a few sentences up?

But the handwriting is on the wall. Biden is in and despite all of Putin's miserable attempts, he is staying in and Democrats are staying in. Joe Manchin is coming to heel because he has to or be labeled a Republicans, the most hated and repudiated political entity in the nation. Republicans cannot stop voting rights. They cannot bring this country back to slavery and Jim Crow for all Americans who don't have billion dollar bank accounts. And they can't tarnish Governor Cuomo who has stood for gender equality, racial equity, police reform, a woman's right to choose, early voting, mail-in absentee ballots, and New York State as the most progressive state in the United States. GOD FORBID.

THOUGH REPUBLICANS ARE TRYING ANY MEANS NECESSARY EVEN IF IT MEANS TURNING DEMOCRATS AGAINST THE GOVERNOR TO GET THEIR WAY AND MAKE NEW YORK A RED STATE, THEY FAIL. As long as Trump leads the GOP, they are assured to fail and they will bankrupt their donors doing so. Their donors are amongst the stupid in the nation. You would think Putin is tired of Trump as a very bad investment????

New Yorkers won't tolerate Trumpers governing them. Why elect someone, a Trumper, a Republican, to govern them so that THEY CAN KILL THEM AND TAKE AWAY THEIR RIGHTS???  Does Senator Gillibrand see what she is doing? Or AOC? Or Schumer? Every time they stand with Republicans, they stand against themselves and their own progressive platform uplifted and fought for his whole life by Governor Cuomo. Can't they see who is responsible for nursing home deaths? The same ones responsible for the spread of COVID? Can't they see the political ambition of Lindsey Boylan? Is it OK to whore #metoo for political purposes, thereby demeaning it? If you answer "YES" to this, you are a Trumper. Why don't you just take a gun and blow your brains out? It's the same thing.

Governor Cuomo has worked tirelessly with New Yorkers to stop the spread of COVID. He has stood against politicians who are liars and who only care about their own political agendas: this includes all Republican hacks in power and some Democrats who side with Republicans to their demise. New Yorkers are not stupid. They have been kept safe with Governor Cuomo. If any New York Democrats side with Republicans against him, any media siding against Cuomo? New Yorkers are attuned and aware.

That behavior is unconscionable. All NON TRUMPER'S LIVES MATTER. ALL NON-GOP LIVES MATTER. Those Democrats siding with gender over life like AOC and Gillibrand are revealing their true political agendas. That is reprehensible. In spirit they are Republicans along with Lindsey Boylan, Mayor De Blasio and others who don't support Cuomo, who he is, his progressive agenda and Maverick programs. Republicans and Trumpers and Trump are synonymous with self-destruction and death. Wake up if you don't already know this. You hate yourself; you hate the truth.