Donald Trump may be off Twitter and other Social Media channels. However, he is busy using his phone. The cohorts that showed up when he summoned his "supporters" and "donors" Proud Boys, Oath Keepers, and other Neo Nazi/White Nationalist groups, militias and dual Russian citizens, perhaps, or Russian Military Intel to the Capitol to "fight like hell to take the country back," have found other platforms and created their own Trump platform. They persist with #thebiglie to bully Republicans in congress and hold them hostage to it. The House Republicans (140)  cling to it like a life raft that is taking on water: they refused to impeach Trump. Senators (45) voted not to hold the trial because it was unconstitutional.

In the first impeachment, they voted acquittal because you can't impeach a sitting president. In the second impeachment they voted he can't be tried because he is out of office, a lie since our history shows the impeachment of another who was out of office. However, the point is moot because by not using the legislative powers that they hold, the congress has chosen not to hold accountable a president who warred against the nation's democracy and symbolic seat of power, the Capitol, by inciting insurrection and riot to overturn the peaceful transfer of power. Voting there should be no trial, the Republican party has converted itself into an arm of QAnon domestic terrorism.

Framing his loss of the election as their loss of the country is a conflation that indicates Trump's insanity. He is fit for a straight jacket, not the seat of presidential power which he held as he fomented terrorism, death, destruction and mob violence on January 6, 2020, the day of epiphany in the Christian calendar and a day of infamy in US History.

For a president fomenting #thebiglie that he had won the 2020 election despite a landslide loss of the electoral college and largest popular vote in the history of the nation to Joe Biden Jr., this lie is the fraud that Trump still promotes. With armed insurrectionists, warring on the seat of government, breaching the Capitol in concert with Republican senators like @SenTedCruz and @SenJoshhawley rejecting the Biden win elector ballots, Trump holds on to the canard. If he caves to the truth, he risks QAnon #trumpterrorists and his own militia coming after him. They desperately want to believe #thebiglie. Why? A million reasons, all of them based on lies, conspiracies, fake news QAnon created via Russian Military Intel, and the fraudulent hope that the US can become a dictatorship under Trump.

These groups in the name of anarchy and chaos generationally and historically have been thirsting for CIVIL WAR and predicting it since after Confederate Traitor General Lee surrendered to Grant at Appomattox Courthouse. Recently, returning vets who joined white supremacist militia groups got caught up in the PTSD moments of military engagements to turn on any perceived enemy, including their own household: it is a psychosis they have not dealt with, as they are the supreme casualties of war. Instead of selecting suicide (the statistics at one point identified 22 vets committing suicide a day) they have turned their misery and hell outward to make war on others. Trump has attempted to harness this rage with some friends in the military (the Flynn brothers, Eric Prince and others) Bannon, Roger Stone, the Trump pardoned Blackstone murderers of 17 women and children and others.

If Trump backs down from #thebiglie, they will go after him. One enemy is as good as another, adhering to an inner drive of violence that carries over from wartime military action. Guns are the drive. Who ends up dead isn't that important, apparently as Brian Sicknick, someone who represented law and order, was bludgeoned to death and will be honored lying in state in the place that he attempted to defend.

Such folks including members of congress still relay death threats in cowardice, anonymously. Threats on January 6th against Vice President Pence were levied as Trump insinuated his Vice President betrayed him. Pence chose the constitution, his oath of office and the truth over #thebiglie and loyalty to Trump. For that, Pence and his family's lives became endangered at the Capitol as they heard "Hang Mike Pence" being chanted outside and inside as rioters attempted to find him. Most probably, he is getting death threats still, even if Trump personally has to call him up and deliver them. Vengeance is not the Lord's, it is Trump's.

Well, that duck don't hunt in the US. The FBI is busy getting tips from friends, family, cousins, enemies, divorced former spouses, partners, the engaged and others who have tips that can bring in the arrests. Whistleblowers have come forward and continue to do so as I write this.

In a week Trump will be put on trial for 1 Article of impeachment that charges him with incitement to overthrow the election and the government. The insurrection which has been extensively filmed via the Capitol cameras and shots uploaded in pride to FB, Instagram, Twitter and other sites identify the rioters. Many of those arrested blame Trump for his call to arms and they, his obedient supporters answered his rallying cry to be "wild" and to "take the country back."

Trump has fired his lawyers. It's a sure thing. Calling Leader Kevin McCarthy to Trump's resort Mar a Lago, he has been lobbying for acquittal. He has been busy on the phone and getting messages out that he must be acquitted and will make his offers of quid pro quos to Republican senators which is tantamount to jury tampering the senate to acquit him. And thus far, 45 Republicans have violated their oath of office by voting that Trump's trial is not constitutional, led by mentally challenged Rand Paul.

Senator Schumer, Senate House Majority Leader pushed back assuring them there will be a trial. There is no defense for insurrection and inciting to riot. Trump had assembled his well organized groups to riot and foment sedition for months, perhaps years. He will accept nothing less than a win. When it didn't materialize after 90 attempts in court and 61 lawsuits, counts and recounts, Trump, organizing in concert with the RNC to provide funding and other Republicans in government, attacked the Capitol in the guise of a protest that required they "fight like hell."

Thus, insurrectionists brought bear mace, zip ties, guns, bombs, hockey sticks, bats, tasers, combat helmets and military gear to attack the government, kill, injure 50 Capitol Police and hunt down to kill members of Congress. Then, they went home to post selfies and other pictures and videos of the chaos and poop walls and urine pee rugs they left behind. All hail Trump for the deplorables which he himself was upset to see acting like the savages they are. What did he expect? For them to show up in well coiffed hair, suits and neck ties and women in fashionable dress? Is he manic? QAnon and this type prefers the slovenly look. 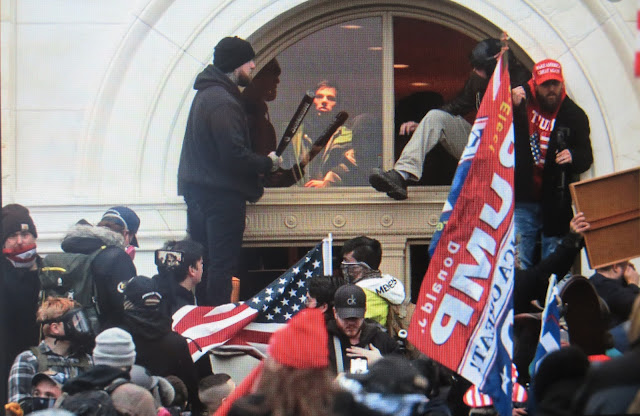 Breaching the Capitol after breaking windows (courtesy of the site)

The evidence on video and photos is overwhelming. Eyewitness testimony may be taken by every member of the House and Senate who were there. They heard the mob chanting "Where's Nancy" and "Hang Mike Pence." They heard the sounds of rioters and the sounds of guns being fired. They were rounded up and told to hide by Capitol Police. Did they think they were safe? How did they know they wouldn't be identified as Democrats? And despite this treasonous moment that must be answered by the 14th amendment for those who participated to see the Biden government overthrown in a coup to satisfy Trump's ego, do the insurrectionists in congress really think that the American people will let this pass. It's just a fluky moment?

Nope! For those who don't believe this was a MAGA riot, all they have to do is watch CSPAN or any of the other channels that will show the evidence at trial. They will then see the videos and photographs with Trumpers wearing MAGA hats, and hear the testimony of whistleblowers who will discuss what they did to prepare months in advance for this, including Trump apologists, military, members of congress if they have courage and Trumpers, who find it OK to take lives, deface the Capitol with poop and urine, threaten our leaders, break windows while proclaiming they stand for "law and order." If Republicans pursue #thebiglie and do not convict Trump, then they are the domestic terrorist party of #trumpterrorists. They believe in destroying the constitution, our democracy and uplifting one man rule.

This is doing Putin's bidding. Trump supports Putin who has no democracy and no constitution and no 2nd amendment. So. The incoherence party of domestic terrorists safeguard nothing for themselves except chaos, no 2nd amendment, riot and death and the opposite of law and order. The FBI is coming as are the Democratic voting public who donate to the Democratic party like never before

The Republican #Trumpterrorists' criminality cannot stand. Trump terrorists cannot stand. Trump has convicted himself with his words, deeds and followers' actions. The Trumpist party will go down in infamy as the first group of congresspeople in the House and Senate to be 14thed for attempting to destroy democracy, and the constitution; a constitution which gave them their seats of power which they intend to hold onto while vitiating the constitution by which they hold power. Say what? That dog just don't hunt.