Genetic Engineering of Foods: A Disaster You Can't Afford to Ignore 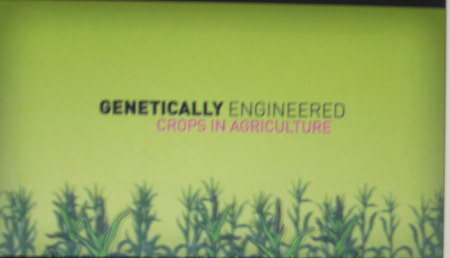 Genetic modification has been going on in laboratories for many years. The blind understanding for consumers, scientists and business was that through it, the food supply would be enhanced, the people would be eating quality items and the farmers and agra business would be making their production more efficient and effective increasing profits. Happily like little beavers running to build a dam to shore up a home for themselves, agra business scientists modified and engineered animals, wheat, corn, everything ranging from farmed fish to insects. The result?  Efficiency and effectiveness in yielding disease resistant crops and producing more efficient larger animal and fish yields.. Their goals were realized and they were encouraged to continue as profits were raked in. But irrationally and unwittingly, they were on a one way course to hell, because there was another result they were not considering. The hidden, dire impact of their "enhanced" produce, animals, fish and insects. This impact is now being felt and will continue to be felt in the future. Only until the last 10 years have alarms been sounded with great frequency about the increased toxicity of our foods, the unhealthiness of our bodies and the pollution and poisoning of our air, water and soil.

Along with the enslaved animals, the enslaved consumer is the guinea pig, the lab rat, the chimp to be experimented upon. The foods created with genetically modified or engineered items create an impact all their own that is incalculable because all of agriculture for mankind that existed for thousands of years has undergone a paradigm shift in the last 50 years. The effect is exponential. After GM/GE plants are turned wild onto the environment, as they "mate" with other plant species, the former species grows extinct. Often with hybrids, they do not produce offspring. Mules, the result of mating a male horse and female donkey do not sire. So often hybrid plants cannot generate seeds.

Is this a good thing? Do we know? The result of having just hybrid seeds could be disastrous for those who would like to avoid agra business and its pernicious effects which helped to create the industrialized pink slime and Frankensteer (mad cow disease, antibiotic filled animals, salmonella, E-coli meat, fatty feed lot-fat animals that are not healthy for human consumption) and drought resistant, convenient to grow dwarf wheat (may be responsible for gluten and wheat allergies and dangerous wheat belly) How would individuals be able to go into farming for themselves if all the seeds are hybridized and will not produce offspring? This is leading to a world wide monopoly of seeds production. Is Monsanto intending to be "Earth Mother?" And there are reports of this monopolization being planned to hold countries at ransom to obtain seeds that are not hybrids. Apparently, Monsanto has ancient seeds in a storage facility. If this is not true, it certainly should write up press releases that counter such speculative reports that fuel the fires against the corporation. But we have yet to see any such press releases negating these claims. Considering that world food production to some extent is already being held at ransom and some continents are suffering starvation (Africa) because of diminished food supply, the scenario could be dire if one or two entities hold most of the ungenetically modified seeds and only dole out hybridized seeds.

The interesting point is that Monsanto is leading the charge on two fronts. One, is to eradicate seeds that are generational and have existed since the dawn of time by attempting to get farmers to use only THEIR seeds. (Lobbyists are working tirelessly, their noses up the rear ends of politicians, their debit cards at the ready to give whatever amount the politicos want to be reelected.) The second charge by Monsanto appears to be to make sure no one in this country knows what it is doing, least of all how it creates its seeds, how it alters them, how it modifies them and what food modifications go into what modified food products. In other words, where Monsanto is concerned, there is no Sunshine Law.  It controls the light to grow understanding. Remember what Rockefellar said (Unseen Hand, by Ralph Epperson, p. 75). Competition is a sin. Well, Monsanto appears to want to make sure she alone is Mother Earth and the hell with us understanding how our food ingredients have been enhanced, tweaked, irradiated, genetically recreated, DNA modified, etc.

How is Monsanto hell bent on keeping us in the dark? There is no GM, GE (genetically engineered) labeling. Do you remember the last time you identified that the bread you were eating was made with GM/GE wheat?  You can't because there is no label stating it. And of course, you think I'm one of those "conspiracy theorists." Well, I wish I could say it were that easy. Until I read William Davis, MD, Wheat Belly, I did not understand, truly about the wheat. I was fat my entire life with a few exceptions you can read about in prior posts on this blog. It was mainly due to all of the flour and wheat products I consumed. For my body, they are anathema. Death! When I curtailed then stopped eating any flour or wheat products, I became healthier, lost a tremendous amount of weight and have no necessity for Advil when I play tennis. My aches have stopped. I know first hand what processed, GM/GE wheat can do to me. Maybe I'm the Maverick and wacked out exception? I can't speak for you, only for me.

But the obesity that has burgeoned since the 1980s when the processing and agra business grew into monopolies with a vengeance has an interesting confluence, does it not?  The trigger has been pulled and events are unraveling so quickly that scientists are hard pressed to understand or even fathom the results of food processing, GM/GE and obesity rates, including childhood obesity.. Blnded by money, agra business, politicians, scientists did not count the long term effects upon consumers, the environment and their very own survival in an infantile, basely ignorant "live for today" approach toward food producing and processing.

But all is not doomsday scenario. There are things you can do. First, become educated.
http://wideeyecinema.com/?p=12109

WOW,You have really done your 'homework' on this. Hopefully readers who are concerned about this will take the time to view and look into all of your links.