Is AG Letitia James' Run for Governor The Machinations Behind the Cuomo Character Assassination and Withholding of Evidence to His Attorney Rita Glavin?

Rita Glavin, Former Governor Cuomo's lawyer last week sent  out a comprehensive letter to New Yorkers who subscribe to her emails. The letter had three attachments informing them of Letitia James' conduct with regard to the supposedly "independent" investigation done by two highly partisan individuals who "adjudicated" the sexual allegations against the governor and then pronounced Cuomo "guilty." The debacle exemplifies one of the worst examples of overreaching by the legal profession and using the press to hatchet job a politician. The report which determined Cuomo "guilty" was released to the press who spread the "guilty" verdict far and wide. Interestingly, even Rudolph Guiliani commented that the former governor, who was not on trial, had been convicted and punished in the press of crimes he hadn't committed.

This slander and libel was egregiously structured to force Cuomo's resignation. One of the alleged grievous acts of harassment occurred before 50 million global viewers when a doctor, bundled up like a mummy against COVID, gave the governor a nasal swab test. His infamy was to tell her ironicaly "she looked good," an obvious joke that was latched onto as sexual harassment. The doctor was counted as one of the "11" who came out against the former governor in a bizarre mixture of impropriety contorted into sexual untowardness by Cuomo haters.

The cabal against the governor (most probably Democratic and Republican) want him out of the running for president or governor or anything. Character assassination was Letitia James intent and this week with the announcement that Glavin predicted would come a few months ago, came. James is running for governor. Gee, really? She wants to be governor?

VICTORY! James couped Cuomo, disenfranchising over 3 million voters with the help of the salivating long time enemy of Cuomo, Joon Kim. That Letitia James has committed an abuse of her office right out of Donald Trump's playbook, effecting a coup during a pandemic and delivering herself a "clear path" to the governorship appears more and more obvious as details come to light and as James refuses to send Glavin evidence supporting the allegations. Nor will James send the transcript testimony of the full 179 witnesses; the report in glaring lies of omission only included 40 witnesses much of it with incomplete information, dates and conflicting information.

I and many others smell the body odor of smear campaign and will never, ever vote for James or Hochul for governor under such questionable circumstances. Indeed, with this demeaning of #metoo in a greedy bend for power proving women also can embody the worst of human behavior, I would rather see a Republian in office. At least I know they are against me and for themselves. James, Kim and their cabal have birsmirched the sanctimony of Democrats' virginal purity and decency . In their lust for power Democrats and Republicans are the same. Citizens are the losers.

James, Kim, Boylan slimed and character assassinated the one man who led the nation through the darkness of COVID-19 when the duck-billed platypus crater brain former president was too busy worrying about polls and his reelection to properly conduct an attack plan against COVID to save the nation. Instead, it was Cuomo who delivered the nation and the world with almost 60 million global listeners. But now, all folks can remember is what Cuomo said during a nasal swab. How momentous...how terrible, what a sexually degenerate comment.

James warped and biased investigation and smear campaign to get Cuomo are unforgivable. Has the current governor led us reasonably? The jury is out; Cuomo would have done more. In the transition process between Hochul and Cuomo, precious time was wasted regarding COVID DELTA infections. Only now has Hochul begun to give the types of reports that Cuomo got up with lightening speed to help New Yorkers through the darkness and death. She simply rode on his coattails; the apparatus was there.

How have Cuomo and Attorney Glavin answered the James coup? Glavin has been prodigious in her attempt to have James respond to her letters which ask for the witnesses testimony. She brings many questions to bear but James has ignored Glavin. James' abject stupidity in not responding suggests James has something to hide. What seems more and more clear is that  as former Governor Cuomo said from the outset, the smear campaign was designed for political purposes. Instead of recusing herself from having any hand in the investigation, James maintained a close watch over it, picked a plaintiff's attorney predisposed to harassment lawsuits, and an enemy of Cuomo who would attempted to investigate him and find something on him for a number of years. The selection of them and James' involvement belies "outside" and "independent" investigation. It has James, Kim's and unseen others' filthy hands all over it.

So as not to appear the craven, James kept quiet her intention to run for governor. Her behavior selling to the press the report's lies of omission and comission over and over is unjustified without answering the questions and amending the report as Glavin has suggested. Sadly, the lies and the coverup she is effecting is as corrupt as Trump's coverups. The brief investigation whose testimony she will not share with Cuomo or the public smacks of Bill Barr's pronouncement of Trump's Russia conspiracy as a "vindication." Vindication was a lie; Russia interfered in the 2016 election. This is James smear campaign and she is hiding the highly unjust nature of the smear. Both are egregious examples of abuse of power. 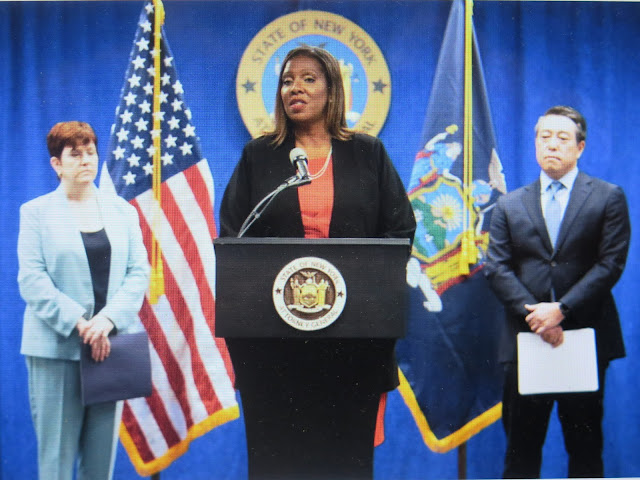 James is witholding evidence from Glavin and Cuomo who have a right to it. There was never a trial yet Cuomo is "guilty" and has had no ability to publicly refute the allegations except via his attorney Rita Glavin who has incomplete information. Truly, James' behavior and character assassination demean her office and vitiate the public trust of the AG. And now she wants to be governor? Her lack of judgment, not recusing herself from the investigation, not investigating the false allegations and conflicting testimony is behavior not worthy of the governorship.

Cuomo won't be a silent mouse. The slime in the press achieved a new level of muck, as news spilled out that Cuomo is being charged with a misdemeanor for alleged sexual harassment. However, no female has charged him; no lawyer of the plaintiff charged him. The Albany County DA didn't charge him. No! The Sheriff's office charged him. Who is behind this? There are no details and a misdemeanor is a nothingburger. However, the headline scandal mongered by the GOP'S NY Post is enough for James to justify herself; she announced her run for governor. 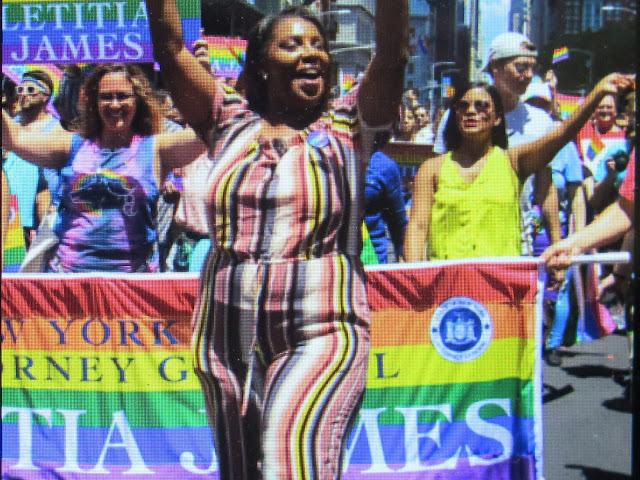 Indeed, it is obvious she plans to ride into the governor's mansion on the oil slick eminating from possibly malfeasant abuse against the former governor. Why don't we know the details? More lies of omission? Who is the woman? Her lawyer? The specific charge? And how did the Sheriff get the complaint and then blow it up into a misdemeanor, keeping the details hidden? And who leaked it to the press? Oh, and at the same time, she announces her run for Governor? She does not fear even the very appearance of evil. This shameless behavior is Trumpy Republican. Where are the Democrats to point this out? Crickets. For their not standing with the foremost official who led the country through the darkness of COVID, I am staying independent and have stopped giving Democrats money.

Joe Scarborough on Friday's morning show on MSNBC pointed out that if it weren't Cuomo, the sheriff would not be bothered to file such a charge if the offender was Joe Schmo. Indeed, speculation which is tantamount to libel and slander once more hits the air waves about Cuomo. All the media is setting themselves up for lawsuits. As Letitia James attempts to lumber over his "dead" career to get to the mansion, the New York Democrats are looking more pathetic and weak by the minute. Bravo Republicans. You will be able to put up a dog catcher and he/she will win against such slimers.

The abject bungled stupidity of the "charge," James' obvious attempt to set herself up for the catbird seat is laughable. Pull back the veil to see the spiders pulling the levers of power: Kim, James and the cabal who fear and hate Cuomo's competence. James' announcement that she is running for governor in tandem with the misdmeanor charge smacks of craven arrogance as if to say, "I don't care if you think I'm low in using Cuomo to feather my nest. That is the way of the world now." Is it? Then the next governor will be Republican and we will lose the state to the RED. Congratulations. Cuomo was the most powerful voice for the progressive line that succeeded in convincing moderates of the efficay of progressivism. Suburban women supported Cuomo as a result of COVID, as did city women. James' stunts will not be tolerated by them.

The Democratic Party in New York has fallen to a new low. It takes leadership to restore it, the type of leadership demonstrated during the pandemic by CUOMO. It remains to be seen who  can bring it together. It certainly will not be James or Hochul or De Blasio or others who have the scent of smear  campaign and slime muck all over them. New Yorkers are not as dumb as Democratic politicos think.

The following is a letter to subscribers of Team Cuomo. You will not find this readily on the news, a form of censorship that is tragic. However, I am posting it here because New Yorkers deserve hearing and seeing something other than scandal sheets that have no basis in the law or fact, but are slanderous, libelous and defamatory.

“Governor Cuomo’s reputation was destroyed on August 3rd at one of the most prejudicial and unprecedented press conferences I have ever seen in my career.  And what happened there was not meant to be independent, it was meant to be an ambush.  Tish James cannot make these allegations and disavow having to defend them in a forum and then refuse to give the evidence.  It's not right.  It’s not fair.  And as a New Yorker I’m outraged by it.”

Rita Glavin, attorney for Governor Andrew Cuomo made a formal submission to the Attorney General outlining countless errors, inconsistencies, glaring omissions and distortions riddled throughout her August 3rd report — including new information about the AG's motivations, conflicts of interest, and — by her own admission — James' personal violation of the terms of the investigative referral.

The Attorney General's personal interference and violation of the referral made to her office, combined with the resulting inexplicably flawed and biased report raise serious ethical questions amounting to prosecutorial misconduct.

Eight weeks ago Attorney General Tish James issued a one-sided report presented to exact maximum political damage, generate scathing headlines and purposely mislead the public.  Tellingly, since then, the AG has refused to answer any specific questions regarding the report while herself mulling a run for Governor.

Today's presentation and submission makes clear that the Attorney General's motivations and subsequent actions were political.  She must now appoint a truly independent body to review her report, her violation of the referral order and today's formal submission.  New Yorkers deserve the truth.