The US Open: Fernando Gonzolez, Round One

Chilean Fernando Gonzalez was back at the US Open after his hip surgery. It took around 8-9 months for him to heal, go through the physical therapy and reconditioning required for a top performance at a grand slam hard court tournament like the US Open where the surface and heat can be oppressive and require exceptional physical athleticism. Missing seeing his performance on grass at Wimbledon 2011 (He made it to Round 3.) frankly, I was pleasantly surprised to see him in the first round of the Open against Croatian Ivo Karlovic.

I was so astounded that I didn't take as many pictures as I normally do, especially of his serve. When I downloaded the ones I did take, I noticed I was more preoccupied with the events surrounding the match, than the match which was Karlovic's at 6-4 ,6-4, 7-6 (7-3). 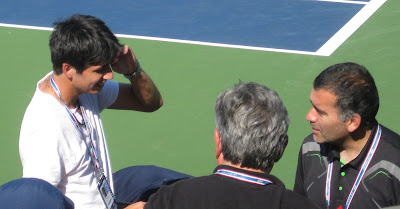 Gonzalez's team noticed during the warm-up session that the court was dead in the area behind the service line and warned Gonzo. 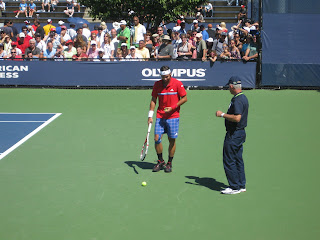 The balls were dropping without a bounce back, as if they were smashing against a vacuum of non resistance. It was like the pressured air within had been sucked out and they were flat pancakes. 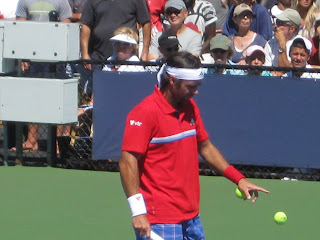 I've never seen anything like it. About 10 minutes was spent calling over an official and then a supervisor who punched a metal device around the area, I was told to let the air or dampness out. 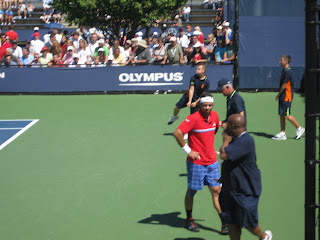 (We had an incredible amount of rain with the hurricane and this was the Monday right after it.) After the "mechanic" took care of it, they finished their warm up and began.

I didn't think that Gonzo (the American nickname for the La Reina Bomber) had a chance to do as well as he did and should have been cheering him on instead of sitting there in a mild state of oblivion and shock. However, at the end of this article, I've included more photos I've taken of Gonzo over the years as he is an amazing tennis player and fun to watch. The stands are packed with his fans and people line up to wait to see him, even yawning and sleeping through the women's match before his in order to secure that rare seat. And if you get to his match a bit late? Hasta la vista, baby! Fans rarely leave early unless Gonzo is dumping and even then, one does not get the sense that he is fighting himself causing his plummet into the abyss. (He is not like James Blake who is tooo painful to watch. More about Blake in another article.) This is because he still keeps his affability and good humor and with antics, spinning his racquet, throwing it up in the air,  more partly out of admiration and frustration, he continues the battle and the fans love him for it, even though he may not win. 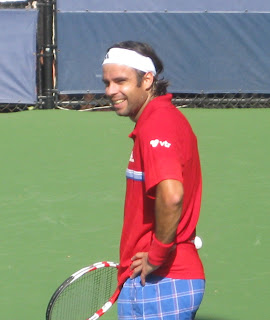 His beloved countrymen who scream Chi, Chi, Chi, le, le, le, have been loyal supporters through every heartbreaking loss and marvelous win. However, he is not in the same category as James Blake who is toooooo painful to watch. More about Blake in another article.

During the match, I could see that Gonzo's forehand, 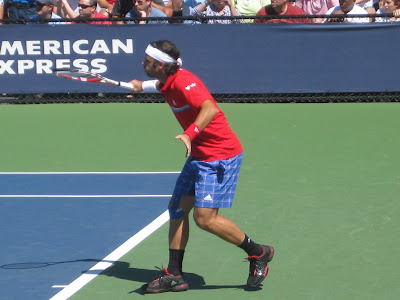 backhand and overhead looked the same. Where it mattered was in his running speed and ability to return Karlovic's serve. The Croatian's height makes it formidable. 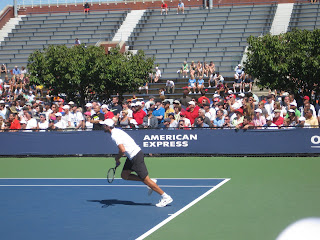 Head to head, Gonzalez has almost three times as many career wins, though Karlovic is one year older. Gonzo has won gold, silver and bronze medals in the Olympics (2004, 2008) singles and doubles, and has been a finalist in the Australian Open 2007. He also was one of a few men who has gone to the Quarter finals for each Grand Slam.
I do believe this history maker could have done better against Karlovic,  but he is not fully up to his capability, yet. 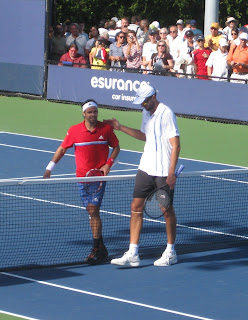 He is to be credited for his determination to be there showing his intention to stay in the game. And knowing Gonzo, he has a few surprises up his sleeve for all of his fans. As a club tennis player for 21 years, I've seen people come back from physical injuries and surgeries stronger and more determined than ever to reach for goals that have not been realized, but are in the hearts of those who dream them. 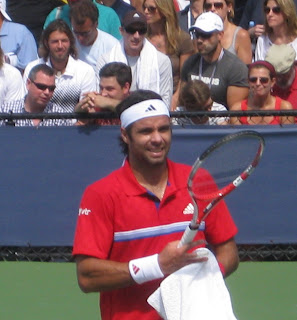 Gonzo is such a player, but even more so because he has been living on the edge at the highest competitive level as a professional. There are more seasons left in his horizons and he is not done with us yet. Go Gonzo!